Why Do Different Children Wheeze Differently? - Simple, but first you have to understand all of paediatrics (also simple)

When a child or young person has one or more wheezy episode, there are various possible causes.  The vast majority of paediatric wheeze is caused by bronchiolitis, viral wheeze and asthma.  It is easy to confuse these conditions, but clarity of diagnosis has real benefits when it comes to providing evidence based treatment.

We know that getting the diagnosis right isn't straightforward, possibly because there are no tests which reliably distinguish these entities from each other in children.  For example, evidence suggests that 50% of children diagnosed as asthmatic do not have asthma (1).  One knock-on effect of any diagnostic difficulties is that people make up rules for us.  "Asthma should not be diagnosed under the age of 5 years."   "Inhalers don't work under the age of 12 months."   These rules are meant to be helpful, but they are both wrong.  If you were only playing the odds, living by these rules would be the way to go, but clinical medicine is also about pattern recognition.  If it looks like a duck etc.
I think that it is possible to embrace the rules, while also knowing when to break them.  I believe that there is a simple model for understanding paediatric wheeze which fits into the probability model and the pattern recognition model.  It's fairly simple and all it requires is a good understanding of all of paediatrics.

Paediatrics isn't the art of learning 30,000 rare conditions.  Paediatrics is mostly about understanding what conditions affect children at different ages and how children respond to those illnesses.  That in turn allows us to recognise and treat appropriately wherever possible.  When it comes to infections and immune responses, unsurprisingly the immune system plays a big role.  Of course a child's immune system goes through several stages and each one dictates a different response to infection and allergens.

How does a baby fight infection?  In simple terms, they don't.  Inherited antibodies do most of the work for the first few months.  Few pathogens get past these antibodies and so the baby's own immune system does very little.  This has lots of implications.  Infections that do occur are unlikely to be common viral illnesses and whatever the pathogen, the baby will be at greater risk from that infection.  Even the recognition of an unwell baby is affected by their lazy immune response.  Temperature of 40C in a 7 day old?  Pull the other leg. 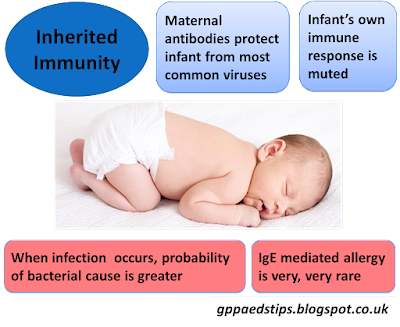 These maternal antibodies eventually run out.  The immune system has to learn and develop.  Older children, like adults have a complex and clever immune system which has stored a wealth of information about the pathogens in their environment.  This allows the older child to produce a response to infection that is not just complicated but sometimes over-complicated. 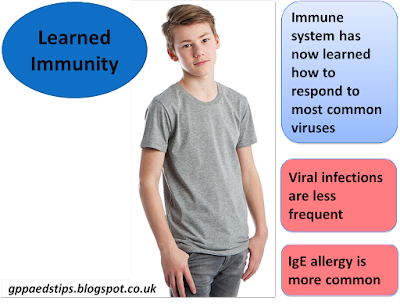 So how does a human survive in-between losing maternal antibodies and learning a more complex immune response?  In scientific terms, their immune system goes nuts.  You have seen it yourself: even with a relatively simple and uncomplicated viral infection, the younger child can have very high temperatures, various rashes and of course viral wheeze.  Other things that are common in this age group are quite possibly in part due to this exaggerated immune response - irritable hips and febrile convulsions. 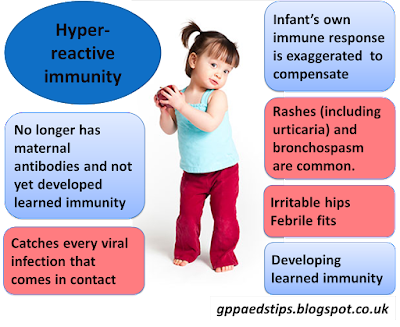 These three ways of responding to infection align very nicely with the three entities that commonly cause wheeze at different ages in children.

Age alone does not give you the diagnosis since there is some overlap.  Thankfully, because each condition represents a different immune response, they each present with slightly different clinical features. As a result we can combine probability with pattern recognition.  The best bit is that the pattern recognition fits well with these three immunological stages of childhood.

What happens when you are a baby and a virus causes a respiratory tract infection?  In most cases, the answer is simply wetness.  Bronchiolitis is what you might expect from an immune system that has not yet fully woken up from its cocoon of maternal antibodies.  Bronchiolitis tends to slowly progress over days from cough and coryza to wheeze and suboptimal feeding, finally ending up with a variable degree of respiratory distress.  It progresses over days.  The severity and progression of these symptoms will vary from child to child, however the gradual onset is characteristic.  This is not to be confused with deterioration, which can be sudden, especially in high risk babies.

Viral wheeze by contrast tends to come on quickly, over hours rather than days.  This is because in viral wheeze is a different response to the same viral trigger.  In children between the ages of about 1 and 6, when the immune system sees a new virus, it tends to go a bit crazy.  One of the effects of this immuno-enthusiasm seems to be that that many children experience bronchospasm as part of that immune response.  So in addition to being able to tell which is more likely (bronchiolitis or viral wheeze) by the age of the child, the rapidity of the onset of the wheeze is a clue. 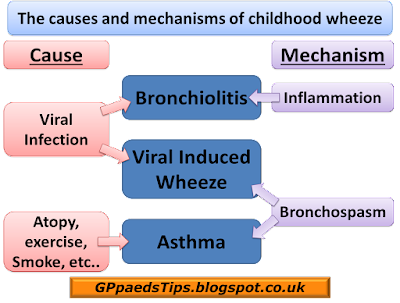 Why does it matter that we tell the difference?  These two different entities respond differently to treatment.  The slow development of inflammation and wetness in the airways that is bronchiolitis does not respond to bronchodilators while the bronchospasm of viral wheeze does.  This is probably the reason for the perpetuated myth that children under the age of one don't respond to beta-agonists.  They do, but only if they have bronchospasm (viral wheeze) as opposed to mostly wetness (bronchiolitis).

Finally, when your immune system moves from the "shoot first, ask questions later" mode into adult mode, asthma becomes the most common cause of wheezing in children and young people.  The trouble is that this isn't something that happens suddenly and it certainly isn't the case that there is a consistent age for this to happen.  Once again though, odds are very much affected by the age of the child.  Does the 8 month old have asthma?  No.  Does the 15 year old have episodic viral wheeze.  Almost certainly not.  Once again, the fact that the different entities represent different stages of immune system maturity translates into both probability and pattern recognition.  The 3 year old is probably having episodes of viral wheeze, but this will be confirmed by the fact that all episodes are precipitated by viral illnesses and the lack of interval symptoms.  The 10 year old probably has asthma and if this is the case they will be having episodes of wheeze not just when they get viral illnesses.

This explains the contradictions between all of the things that we know about asthma in children.  We are told that we shouldn't diagnose asthma under the age of five.  That rule works well from a probability point of view but not from a pattern recognition point of view.  What would you do if a 3 year old has a chronic cough and multiple episodes of wheeze that are not all provoked by viral illnesses?  I think that this child might be the exception to the probability rule.  Equally, in a 2 year old with chronic cough and no history of wheeze the temptation to diagnose asthma is a dangerous one given both the lack of  probability and the absence of a classic history. 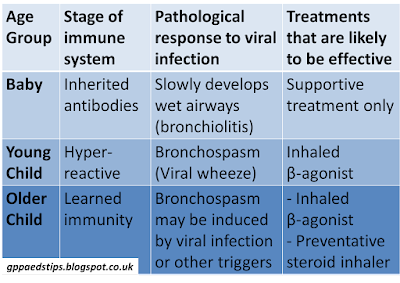 Understanding the way that children respond to infection at different ages tells us a lot about where (what age) to look for each diagnosis and what to expect (the classic history) to find in order to confirm that diagnosis.  This allows us to maximise the chances of giving the most appropriate treatment, most of the time. 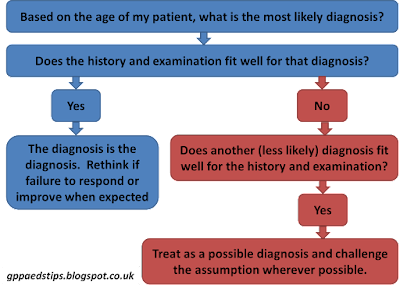 When there is a discrepancy, we need to be aware that probability and pattern have not agreed, and have a low threshold for rethinking.

Disclaimer: No-one understands all of paediatrics.  I mean really, who can explain why children will eat glue and drink air freshener but refuse to eat the food that you want them to eat?  That's why it's best to stick to the basics (like immunology) and leave the complicated stuff to the parents.