Why has no one told me this before? Confirmation bias - It lies to you. It lies to everyone. What has it been telling you about children? (Part 1)

Recently, after I had explained why something was a medical myth, a colleague in Primary Care looked at me and with genuine exasperation said, "Why has no one told me this before?"

Good question.  The answer to this is complicated.  A lot of the time there is a big 'Emperor's New Clothes' factor.  Declaring a myth to be untrue requires someone to burst the bubble and it is not always the case that someone is listening or that anyone wants to change their belief.

Myths start for various reasons but only persist if they are fed.  For example, very few people actually believe in the existence of fairies.   Seeing a fairy or hearing from someone who claimed to see one might change that.   People do however believe that mice like cheese without any good evidence to support this.  Where does this belief come from?  Surely we can't all have taken Tom and Jerry cartoons at face value?  Since there was never any reason to doubt what we were told we continued to believe it. Well, it turns out that, whatever the basis for the belief, it is wrong when tested scientifically (Yes, this has been researched and published!).

The best ingredients for a myth are plausibility and confirmation.  Take the old chestnut about not being allowed to use adrenaline with anaesthetic in fingers as an example.  This myth originated when lidocaine and adrenaline were commonly mixed with various things to aid anaesthesia and asepsis.  The mix often contained cocaine, procaine and boric acid.  When skin necrosis developed in fingers, the cause was not isolated, but the idea that a vasoconstrictor (adrenaline) was the cause was credible.  In fact, the other ingredients were probably to blame.  Thus a myth  has persisted for roughly a century was created by a plausible theory and repeated episodes which seemed to confirm this theory. (1)

Confirmation bias comes in several forms.  It affects how we search for, interpret and retain information.  They have been responsible for misleading us about quite a few things in paediatics.  There are so many, in fact, that it would be ambitious to put them all in a single post.  Instead I will divide them roughly into two groups - those where we have been misled about cause and those where we are misled about effect.


For now, I am going to run through some examples of presumed cause.  Lets start with the things that you may have been told are caused by something else, but probably are not.  It works like this: 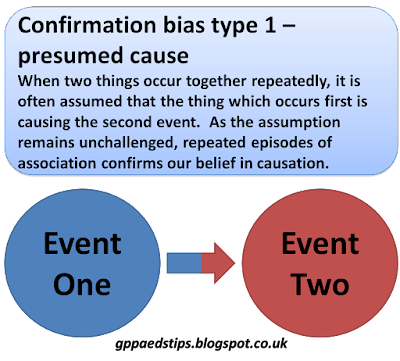 Of course sometimes, the presumed cause is real.  We have confirmation bias for a reason and in most cases it is teaching us, not lying to us.  Assumption has a bad name for itself, but is a necessary part of how we work and learn.

(No disrespect to Mrs. Sullivan, who taught me that to assume makes and ass of you and me.  Mrs. Sullivan was an English teacher and the spelling mnemonic is valid even if the statement is completely wrong in the context of exploratory learning.)

In certain circumstances, the reality is very different from our assumptions.  This is usually due to a factor that is not as obvious as the two that we have associated. 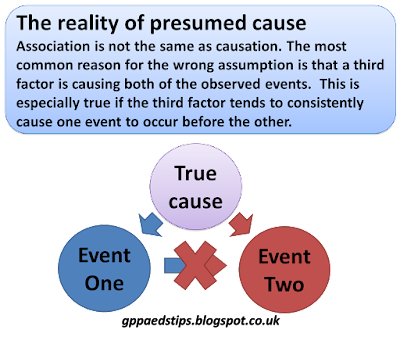 The only problem is that the evidence goes against this being true.  When children are treated for their fever, it seems that they have the same number of fits.  (2) So what is the cause of the fits?  Probably badness.  Badness is the stuff that infections make which causes the fever, the flu symptoms and all that.  You know, chemicals and stuff.  So even when we treat the symptoms of the infection, badness still causes the seizure to occur.  We can't get rid of viral badness.  In most cases we just make children feel better until they make themselves well. 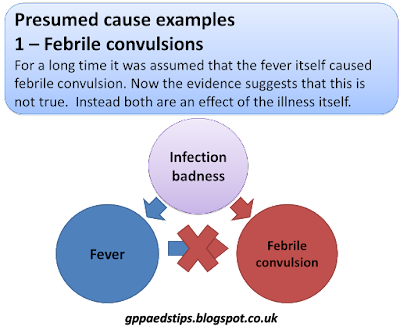 How does this change our practice?  When I found this out, it completely changed my approach to children who had suffered a febrile seizure.  I no longer worry that treatment needs to be focused on the fever rather than the child's wellness.  Most importantly, I now tell parents that the seizure was not preventable.  Often, the parent blames themselves for failing to treat the fever adequately.  They need to know that this convulsion was not their fault.


Next up is the apparent epidemic of allergy to amoxicillin. 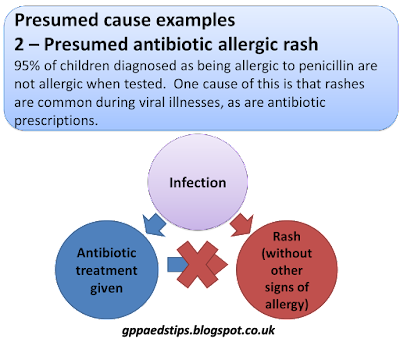 We have to work this one backwards from the evidence.  Approximately 95% of children who have a label of amoxicillin allergy have no allergy when tested or challenged. (3) The explanation for this poor correlation is that children of a certain age frequntly develop a rash (which is often urticarial) while ill with a virus.  Viral and bacterial infections are difficult to tell apart, so it is not uncommon for a child to be given antibiotics while unwell with a viral illness.  When a culprit is sought for the rash, the antibiotics may be blamed, though the reality was that the virus caused it.

Finding this out completely changed my practice.  By careful case selection, I take every opportunity to undiagnose penicillin allergy.


Next up: another much maligned medicine - Ibuprofen.   Ibuprofen is often avoided in children who have history of wheeze.  I suspect that this is one of the biggest cases of (wrongly) presumed cause currently in paediatric practice.  You may have been told that ibuprofen causes wheeze or that ibuprofen should be avoided in children with a history of wheeze.  Well, it turns out that this is another myth that has persists despite being disproved. 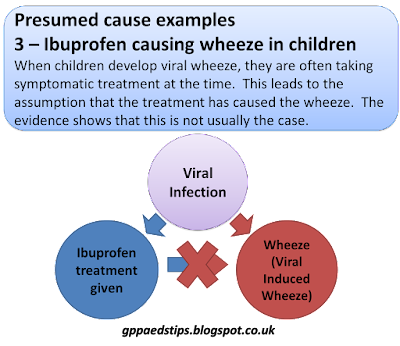 Once again, the association in space and time of the medicine and the symptoms leads to a very rational fear that it is the ibuprofen causing the wheeze.  When large groups are studied, it seems that Ibuprofen may even be protective against wheeze. (4)  I'll just leave that one with you for a minute...


So after that bomb shell, something a little more palatable but still interesting.  Growing pains are not caused by (wait for it........) growing.  In fact no one knows what causes children to have growing pains. 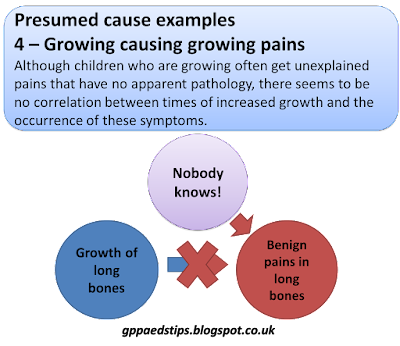 Feel free to file this under 'how does that change my practice?'  I just think that it is interesting that we feel the need to have an explanation for a symptom which has no known cause and no effective treatment - a bit like colic really!


Next up is something a bit more meaty.  Based on the sessions that I do for GPs here and there, I would approximate that roughly three quarters of primary care clinicians are aware that there is a concern about using ibuprofen for children with chickenpox.  I also know that the basis for this concern is poorly understood.

The truth is that this concern was raised based on a cluster of cases of children who developed severe complications of secondary infection about 20 years ago (5).  No causal link has ever been convincingly shown and the fact that huge numbers of children continue to have ibuprofen in this context makes me think that more robust evidence would have emerged if there was genuine cause and effect. 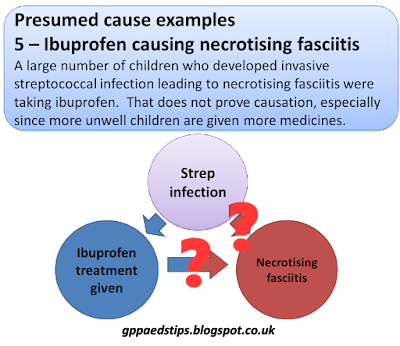 Invasive streptococcal infection during varicella infection is something that all clinicians should know about.  It is also true that most children who have chickenpox are not very unwell and so paracetamol should be all that is needed.

So why does this matter?  It matters when someone is blamed for something based on poor evidence.  So, let's be clear.  The Emperor appears to be naked, but if anyone else can see that he's got clothes on, I am prepared to be convinced.

Disclaimer- I would never use any of the treatments listed above.  For many years now I have only used fairy magic to treat my patients and any prescribed medication is a pretence.  No one can prove to me that fairies don't exist.