Making a Diagnosis of Lower Respiratory Tract Infection in Children

This is one of the most common and difficult calls in General Practice, Emergency Medicine and acute Paediatrics: when to treat a child as a lower respiratory tract infection.  It's important because we don't want to miss a diagnosis of LRTI/ pneumonia, yet overtreating is bad medicine.  It's difficult because most children with an upper respiratory tract infection will have a cough and fever, and because the parents will be worried about the possibility of LRTI.  To make things worse, any child with uncomplicated URTI could later develop LRTI.  Not often, but often enough that it can influence our decision making.  So how do we get it right? 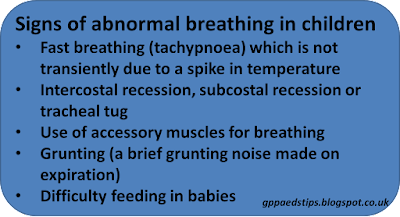 I think that when I was taught as a medical student, the auscultation findings in the chest were over-emphasised.  The reality is that these can be misleading.

First of all, the presence of focal findings in the chest are common even in the absence of LRTI.

Secondly, the absence of focal findings in the chest is a relatively common scenario in the child with LRTI.

Nor should we rely on chest X-ray (CXR) to make the decision for us.  The sensitivity and specificity of CXR as a way to diagnose pneumonia in children is too poor to justify using radiation when the diagnosis should be made clinically.   The BTS guidelines for community acquired pneumonia in children and the Clinical Practice Guidelines by the Pediatric Infectious Diseases Society and the Infectious Diseases Society of America both recommend that CXR and blood tests are routinely avoided. (1,2)

There are no absolute rules.  This is paediatrics so there are special circumstances.


Bringing all of these things together shows that there are two key features.  The first of these is abnormal breathing in the context of an unwell child with cough.  The presence of abnormal breathing almost immediately makes it overwhemingly likely that the problem is LRTI, bronchiolitis or viral wheeze.  The second feature is wheeze, which largely rules out LRTI.  It's almost that simple.  Almost... 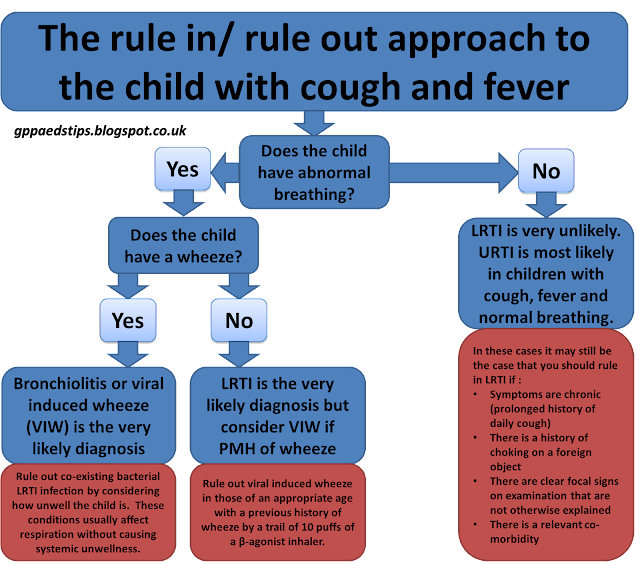 For more on how to tell the difference between bronchiolitis and viral induced wheeze, read this post: "Why Do Different Children Wheeze Differently? - Simple, but first you have to understand all of paediatrics"

It is important to remember that LRTI is usually preceded by URTI.  Safety-netting advice is key.  Here's an example of the kind of thing that I tell parents: (3) 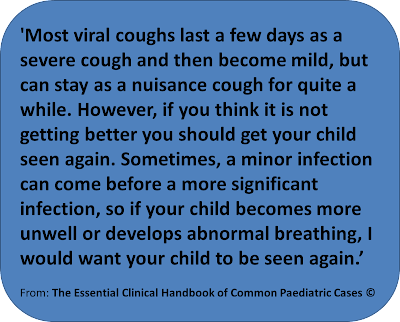 Ruling in and ruling out is a dynamic process.  Involving the parents is an important part of that.

Edward Snelson
Not a member of the ruling class
@sailordoctor