It's Not Easy Being Wheezy - about antibiotics and wheezy kids

In my formative postgaduate years as a doctor, I was told by more than one mentor that antibiotics were a good treatment for children who were wheezing. This advice was given bay various people at different times and whether this was bronchiolitis, viral wheeze* or an exacerbation of asthma, the principles seemed to be the same. The logic is sound - we know that infection triggers all three, and we can never be certain of the infection being a straightforward viral episode.  That was how it was put to me anyway.
*If you are unsure about the difference between viral wheeze and bronchilitis, follow this link for an explanation.

I no longer believe in this strategy as a treatment option for wheezy kids, and this is why:

It's not easy being wheezy.  Children with tight lower airways are up against it but often cope extremely well with their bronchospasm or their bronchiolitis.  I am constantly delighted by the ability of these children to be cheerful despite quite significant breathing difficulty. 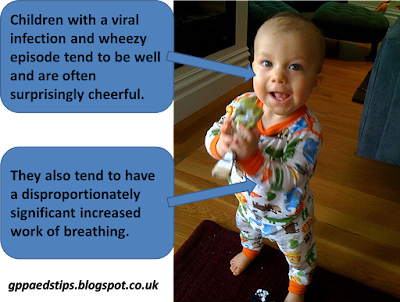 It's even worse to have a bacterial lower respiratory tract infection.  As well as the breathing difficulty that comes from the loss of functioning lung, there is the tiring effect of the illness.  Having pneumonia is unpleasant and often exhausting.  It would be unusual to see a child who was cheerful and well despite a bacterial lower respiratory tract infection. 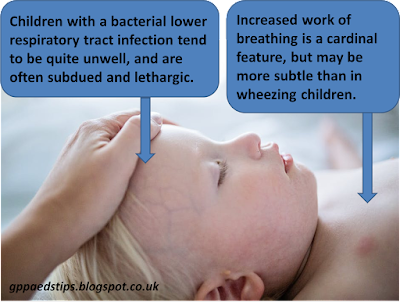 Now imagine combining the two.  Doesn't look good does it?  Children with bronchiolitis and viral wheeze cope with the difficulties of wet or constricted airways because they are systemically well.  Add the lethargy of bacterial infection to this and you go from a child who can compensate to one who cannot.  In short, you won't think "maybe there's a bacterial LRTI as well as the bronchiolitis or viral wheeze."  You'll know it.

Evidence from research backs this up.  The Cochrane review of antibiotics for bronchiolitis concluded that there was no benefit from antibiotics. (1)

You could say, what's the harm in trying antibiotics?  There are many reasons why unnecessary antibiotics might be harmful and none of these are to do with drug resistance.

So, it's time to do away with the idea that antibiotics have a role in treating well children with bronchiolitis or viral wheeze.  I believe that you'll know the children who need antibiotics because they will be properly unwell.

Disclaimer:  Secretly we all know that antibiotics do treat viruses, but if you tell anyone, you'll be removed from the Magic Circle.