In the previous post, I gave a little guidance about patterns of cough in children.  Now, I'll add a little probability to the mix.  After all, good medicine relies heavily on knowing the likelihood of a given disease in a particular scenario.

As someone who occasionally mentions medi-facts that came from articles that I have long since lost track of, I was pleased to be able to re-find an article from Chest (the journal of the American College of Chest Physicians) that I have been using in both practice and teaching.  It asked the question, In persistent cough, can we extrapolate an adult based approach to be used in children? (1)

The resounding answer was no.

Once again, children are shown not to be mini-adults.  Paediatricians everywhere breathe a sigh of relief...

What is perhaps surprising is the number of children with a persistent cough who have evidence that pertussis is the culprit.  In several studies now, the proportion has been shown to about 20-40 % of children who have been coughing for more than two or three weeks.  That large number includes studies that have been done since the ramping up of vaccination campaigns. (2)

Pertussis is a significant illness which still has a mortality of around 3% in unvaccinated babies.  Although less of a menace since the introduction and later improvement of vaccination programs, pertussis is still endemic.  It should be suspected whenever a baby presents with an acute cough.  The typical cough is paroxysmal and there are features that often make the diagnosis more obvious.  Some children get the classic 'whoop' at the end of a coughing paroxysm while some will vomit or have (hopefully brief) apnoeas. It seems from the studies into persistent cough that not all pertussis is obvious acutely.   Early detection reduces both symptoms and transmission.  Guidance on this from the Public Health England can be found here.

So, before thinking that a persistent cough in the absence of wheeze might be asthma think: 'Could this be pertussis?'  The advantages of this are: 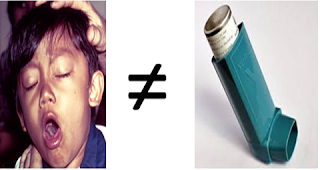 Disclaimer: Of course if we're going to talk probabilities, it's probably a virus...

Better FOAM - are you getting the picture? (Easter egg - persistent cough in children)

I have an apology to make.  When I wrote about how to tell the difference between bronchiolitis and viral induced wheeze, I talked too much.  I know this thanks to a wonderful audience of GPs who are attending a series of paediatric masterclasses here in Sheffield.  When I described the way to use the prodrome of the illness (as described in the post linked above) I could tell from the faces in the audience that my explanation hadn't yet hit the mark.  Then I put up this slide: 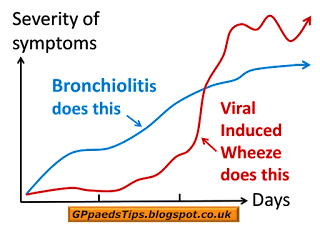 This, coupled with a description of the presenting complaint* for the two conditions seemed to work and I'd like to think that everyone then understood what I was saying.
* With bronchiolitis, the parent usually describes a day by day gradual worsening of the symptoms; with viral wheeze the child often goes from snotty to very wheezy over the space of a few hours.

Pictures, coupled with explanations are a powerful tool for teaching.  I don't have the time to make pictures as much as I would like to, but I will try to do so more often.  Thankfully I learned my lesson just in time, as I was going to write about children who present with persistent cough this week.  Once again, pictures will be needed.  Here I go:

Persistent or Chronic Cough in Children

Children are often brought to GPs and EDs with a cough as the primary symptom.  It is not uncommon for the cough to be reported as having been there for weeks or months.  These histories of protracted coughs tend to cause a variety of responses including a mixture of scepticism and anxiety.  My initial thought of, 'Has this child really been coughing for weeks?' is followed by 'Could it be tuberculosis?'  Both responses are valid.

There are essentially four groups of cough that are present over the space of weeks or months.  The first and most common of these is the cough that comes and goes.  These children are almost invariably having repeated viral upper respiratory tract infections (URTI).  For this reason, the first task is to establish whether the cough ever resolves, leaving periods of normality, however brief.

The second group is those that have a dry but persistent cough that never seems to get worse but never goes away.  In the absence of any red flags (see below) or other clues, this may be normal.  About one in five children (1) are reported to have a daily cough.  Most have no underlying abnormality.  Some have a behavioural element or a relatively benign cause such as post-nasal drip.

The third group is the slowly resolving cough.  Coughs often persist for weeks after an infection has gone.  Even following a simple viral URTI, a large proportion of children cough for weeks afterwards.  Sometimes, such as with bronchiolitis or pertussis, the cough takes even longer.  (2) The important thing is to establish whether the cough is resolving, however slowly.

The red flags that suggest that referral is needed are fairly intuitive:

Where a benign cause is suspected, then treatment can be directed accordingly:

In all cases, smoking cessation is likely to help.

Suspected infection - if there has been a temporary improvement from antibiotics and the child has a chronic wet cough, this may need a longer course (e.g. two weeks) of a second line antibiotic (e.g. Co-amoxiclav)

Behavioural - reassure and advise to distract the child.  The family must avoid any reinforcing behaviours of their own.

One thing that is not recommended is a trial of systemic steroids in chronic cough.(3)  Cough as an isolated symptom, without any wheeze or other indication is very unlikely to be due to asthma.  Steroids may however, mask a mediastinal lymphoma in rare cases.

Symptomatic treatment of the cough is also best avoided.  There are no effective cough remedies in children that do not have significant adverse effects.

So, when a child presents and you are told that the cough has been going on for 6-8 weeks that doesn't mean a lot without the pattern of cough and associated features. 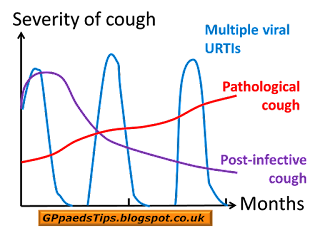 In most cases no treatment is needed.  If explaining that doesn't go down well with the parent, instead of prescribing something anyway, why not draw them a picture?

Email ThisBlogThis!Share to TwitterShare to FacebookShare to Pinterest
Labels: Cough

Who should write your guidelines? Sepsis and the happy GP

In January 2016 NICE announced the consultation period for the draft guideline about sepsis and soon afterwards a sad news story hit the headlines.  The story was about a boy who had tragically died of sepsis.  There is a temptation to allow such emotive events to be drivers when writing guidelines but this needs to be balanced by considering the effect of any referral or treatment threshold on the whole population of children presenting to GPs and EDs.

As a user of guidelines, I would like to explore the complexities of any protocolised approach to recognising sepsis.  There are elements of the process that are simple, and elements that are less so.

First of all, let me be clear.  I welcome a guideline that aims to raise the awareness of clinicians to the possibility that a child may have sepsis.  I welcome the push to speed the diagnosis and shorten the time to receiving intravenous antibiotics.  However, greater sensitivity usually comes at the cost of poorer specificity.  In this case that probably means referring more well children and treating more well children in hospital.  That does not just have implications for the workload of emergency departments and inpatient wards.  It also affects every child who did not have sepsis but was flagged up on the flowchart as being high risk.  Referral to hospital and admission as an inpatient both have an associated morbidity.  We need to be careful not to repeat the bronchiolitis admission effect. (2)

What would a guideline for sepsis look like if it was being written by GP’s for GP’s?  I think it might look a bit like this…

I think that most of that would be agreeable to most clinicians.  After that, I find myself struggling to agree with myself over the nitty-gritty of the what to do when in each circumstance.  The reason for that is that there are so many common scenarios that make a sepsis pathway virtually impossible to write.  Some of these scenarios are the post immunisation baby with a fever, the six month old with bronchiolitis and tachycardia and the 2 year old with viral wheeze.  Each of these cases bring an interesting sensation to the mix.  I inherently feel that sespis is much less likely in these children and yet each will be spat out of my decision tool with a tequila coloured label of some kind.

What is the solution?  I feel that sepsis guidelines need to promote the rule-out value of wellness.  Wellness seems vague but it is really a combination of gestalt (gut feel) and what we see a child do.  Gestalt is valid as long as it is built on plenty of valid clinical experience.  What we see a child do is valid because when a child smiles and plays, it tells us that the frivolous centres of the brain are perfused and not toxic.

Will wellness be in your sepsis guideline?  I don't know, but there is one way to be sure.  Write it yourselves.  Meanwhile, the NICE guideline is still in consultation and if you are in the UK there is time to register as a stakeholder and send comments.

There is also one last chance to take part in the survey that is seeking to gain consensus on the factors that clinicians everywhere use as part of their rule-out process in ill children.  Please do take part.  It takes less than five minutes.


Disclaimer: Simple is easy when you're not actually writing the guidelines.