The Truth about Lactose Intolerance

Sometimes, when I'm checking my facts, I'm surprised to find conflicting information.  Sometimes this is because there are no facts and this information void is filled with opinion or speculation.   Sometimes there are myths that confuse the picture and sometimes the information is being interpreted differently by different people.  Lactose intolerance in children is one paediatric condition that is described very differently in various places.  So what is the truth of it?

Let's start with the basics.  Lactose Intolerance (LI) and Cow's Milk Protein Allergy (CMPA) are very different problems but are often confused with each other.  The simple difference is that you can't be allergic to a sugar.  In CMPA there are two different types of immune response possible.  The one that usually gets confused with LI is the non-IgE CMPA because it causes similarly vague and non-specific symptoms.

Lactose intolerance is essentially a budgeting problem.  Breast milk and formula milk contain the sugar lactose.  This provides ready energy and makes the milk taste nice.  To break down lactose, you need an amount of lactase which is proportionate to the amount of milk you consume.  This lactase comes from two sources.  Breast milk contains some lactase, but the majority of lactase that is required is produced in the villi of the small bowel.

The maths is simple.  If you have enough lactase to deal with the lactose that you consume, all is well.  If you don't, then undigested lactase passes through to the large bowel.  In the colon, bacteria ferment the sugar- causing diarrhoea, abdominal pain and bloating.  (Interestingly, this is also how lactulose works, despite what you may have been told - details about that here)

How lactose intolerance works is well established.  What is far more unclear is how common it is in children and what the underlying cause is when it is present.  In order to understand all of that, it's worth knowing the evolutionary history of lactose intolerance.  Since man has only been farming animals for the past few thousand years, the need to digest lactose into adulthood is a relatively recent phenomenon.  The default physiological norm was for lactase production to diminish and stop after infancy.  Most people now have a lactase persistence gene which allows the small bowel to continue to produce lactase.

There are three types of Lactose Intolerance (1)

This is caused by damage to the small bowel.  In many cases this is the result of a gastroenteritis infection.  Secondary hypolactasia can also be the result of damage caused by non-IgE food allergies.  There is nothing inherently wrong with the child's ability to make lactase, but the small bowel wall that does that has been stripped.  The symptoms of secondary hypolactasia resolve when the damage to the small bowel is repaired.  In the case of post gastroenteritis LI, a few weeks lactose free will help that considerably.

This is an autosomal recessive genetic defect resulting in the complete absence of lactase production.  This is extremely rare and according to the experts, there have been less than 100 case reported worldwide. (2)

So here's my problem - sometimes, none of the three known entities fit.  I see lots of parents who report symptoms which are being associated with the child's (usually formula) feed.  They are then absolutely convinced that a lactose free formula has suddenly resolved their infant's problem.  Discuss...

Of course the type of lactose intolerance only matters in terms of deciding whether the child will need long term or short term avoidance.  Secondary hypolactasia should resolve, leaving the child able to resume business as usual once the damaged small intestine has repaired itself.  In general terms, the treatment for LI is the same - remove lactose from the diet.  Nevertheless, the fact that children seem to fit the bill for lactose intolerance without fitting any of the known entities is perplexing.

One possible explanation for this is that these children do not have lactose intolerance at all.  Instead the diagnosis has been suspected based on non-specific symptoms, and the resolution of these symptoms following the start of a lactose free milk was coincidence. 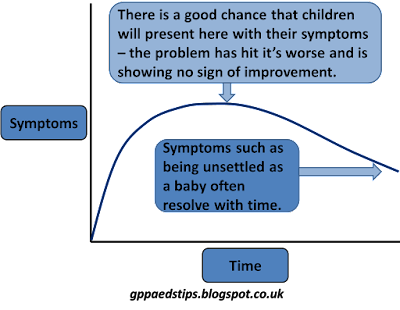 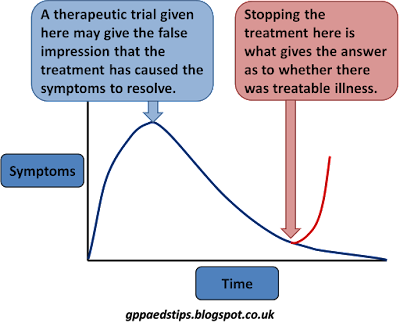 As well as the children who have no pathology, there is the group who are labelled as lactose intolerant when what is really wrong with them is something else such as reflux disease (GORD) or Cow's Milk Protein Allergy (CMPA).  Wouldn't it be nice to be able to be sure which condition was affecting the child?

There are tests available for lactose intolerance but they are not readily available in primary care, whereas a therapeutic trial is always a tempting option. The tests used in secondary care seem to vary around the world.  Hydrogen breath testing is a pain free way of testing but impractical  in infants making it unhelpful in most cases.  A lactose tolerance test involves giving a large dose of lactose and then doing serial blood glucose measurements.  A lactose challenge does the same but relies on the witnessing of symptoms following the administration of lactose to the child. 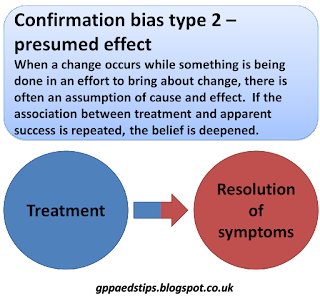 In the UK, the vast majority of LI diagnoses are made on clinical suspicion and treated by an exclusion diet.  The difficulty with this is the risk of overdiagnosis when using this strategy.  Symptoms often change with time and so any apparent improvement following an exclusion of lactose from the diet should probably be challenged in every case.

So what is the truth about Lactose Intolerance?  Is is frequently being diagnosed in contradiction of sound medical understanding of the condition?  Is there a significant number of infants who don't fit into the three categories described above but still have genuine LI?

I think that the presumption should be that a baby who has significant symptoms (other than the classic LI symptoms following a gastroenteritis) should have another explanation sought.  They may have GORD or CMPA but it doesn't make sense that they should have lactose intolerance unless there is a form of this condition that is as yet not understood or well described.

Hot tip - if a lactose intolerant baby is breast fed, there is no point in excluding milk from the mother's diet in an attempt to resolve this.  Breast milk produces its own lactose.  If the diagnosis is convincing, try supplementing the lactase.  If you want to know where to find it, lactase is the 'active ingredient' in some colic treatments.  It doesn't actually treat colic but that is another story.  At least it has a use here.

Think Sepsis - What does that mean?

You may have noticed that there are a lot more paediatric sepsis guidelines flying around these days.  When people write guidelines, they are trying to be helpful but it is always worth knowing why they decided to be helpful.  For example, guidelines for diagnosis of asthma in childhood are strongly motivated by the desire to reduce the overdiagnosis of asthma in childhood.  We know this because the guideline writers tell us.  They're quite good like that.

So what about sepsis?  Well there are two genuine problems that keep coming up around sepsis:
There's probably more to it than that but that is the main thrust of what most sepsis guidelines are trying to achieve.

I think that the guidelines that have come out over the past few years have done a good job in guiding our management of sepsis.  Once you have decided a child has enough evidence of being septic to be treated, crack on and don't spare the horses.  There is no doubt that as a profession, we are getting our act together in this respect.

The first part is more tricky. diagnosing sepsis is difficult.  Sorry, let's be honest, it is really, really difficult.  Sepsis is missed all the time, and I am not talking about the overdiagnosis of missed sepsis which goes like this:

There is a two part truth which guideline writers and readers need to accept.  Sepsis is often missed because it is often easy to miss it.

So why is it easy to miss sepsis?  There are several reasons;

So, in summary, early sepsis is vague and it is easy to miss because it often hides behind a more obvious diagnosis.  The result is that guidelines are inherently too vague or too prescriptive when it comes to the recognition of sepsis.  Furthermore, if sepsis is not considered, the guideline is of no use whatsoever.

There is relatively simplistic way to deal with all of this.  Since the challenges are mainly about awareness and decision making, I think that a sepsis guideline could simply look like this: 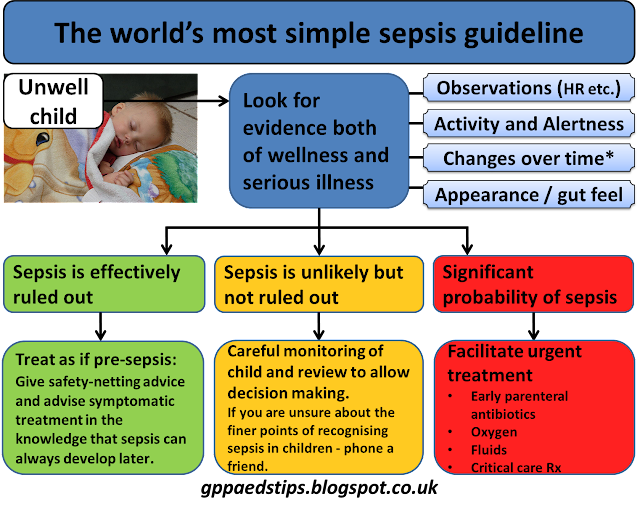 Here are some footnotes on this:


So, thinking about sepsis is the crucial first step.  It's the deciding that takes the most skill.  Then, when it comes to acting, we should be getting on with with doing whatever we need to do without unnecessary delay.  Hopefully that has made it sound a lot more simple than it really is.

Edward Snelson
Simple is what I need
@sailordoctor

Disclaimer - Simplification is a huge cop out for medical writers, but it's also a lot of fun.  Try it sometime.