In the previous post, I covered how best to make a diagnosis of lower respiratory tract infection (LRTI).  Anyone who has the pleasure of working with acutely ill children knows, the diagnosis is only a small part of what we do.  A big part of what we do is making that all important decision - home or hospital?

This decision is usually made up of several elements.  What is interesting is that the same principles can be applied to all of the major respiratory problems that we see, namely:
Once one of these diagnoses has been made, the decision about whether to admit or manage at home is a huge one.  On the one hand, we don't want to admit children to hospital unnecessarily.  Apart from the inconvenience and stress to the family, there is a significant risk of adding insult to injury as so many children who attend hospital acquire additional infection.  On the other hand, we know that if a respiratory problem does deteriorate, it can do so quickly and catastrophically.  If there is a significant risk of a child going off, they should be somewhere that can respond appropriately.

In the majority of childhood respiratory illnesses, the treatment itself is not what requires the child to be in hospital.  It is no longer routine to have a chest X-ray and intravenous antibiotics for uncomplicated community acquired pneumonia. (1)  Many children who are admitted with pneumonia receive no investigations and are treated with oral amoxicillin and discharged when they show improvement.  Severe croup is often a waiting game.  Viral wheeze is usually treated with inhalers via spacer.  Babies with bronchiolitis are often observed while a team of expert paediatricians avoid the temptation to "try something" that research has proven to be pointless.  You get the picture.  These are the times that paediatrics is the art of masterful inactivity.  Believe me, that is harder than it sounds and is actually quite labour intensive when done properly.  The point is, they still need to be there, because these are the children who, if they got worse, would require escalation of treatment.

So if the need for hospital specific treatment isn't always the thing that determines the need for admission, what else is?  In illnesses that always need hospital treatment (e.g. Kawasaki Disease) the decision is made for you.  However in respiratory problems that can be treated in the community, the decision is mostly about risk assessment, which is never as simple as people make it sound.

Guidelines often imply that the assessment of a respiratory presentation is a simple matter of deciding severity or calculating a score.  I like an over-simplification as much as the next clinician, except when it doesn't work, which is fairly often.  Why isn't it that simple?  Because not a one dimensional assessment.  The good news is, it's not that complicated,  It's just 3D instead. 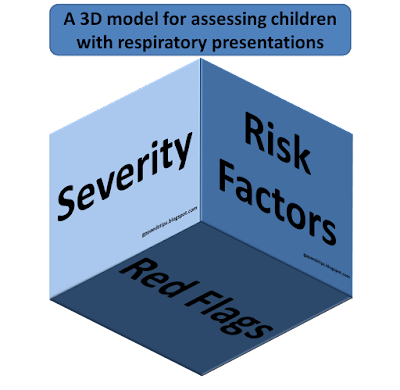 The first dimension of the assessment is to decide severity.  All acute respiratory problems, like chain coffees, come in small medium and large.  Deciding which presentation fits into mild moderate or severe is fairly intuitive and the same principles apply across the different diseases. 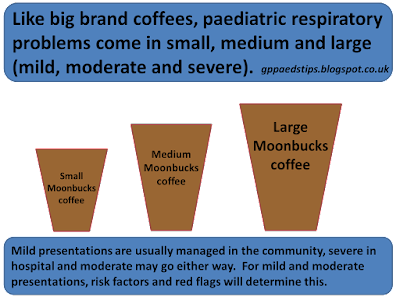 Severe makes the decision easy.  Severe needs to be treated in hospital for several reasons.  Severe is usually a set piece, and although severe can be terrifying, it's not usually a cause of decision fatigue.  That comes from deciding what to do with the rest of them.

In a previous post, I shared some thoughts on croup scores and severity.  You can read that via this link if it would be helpful.

This means that other factors are involved in the decision.  Because we are assessing risk, we need to consider risk factors.  These, when applied to the severity of the illness literally multiply the risk of something bad happening. 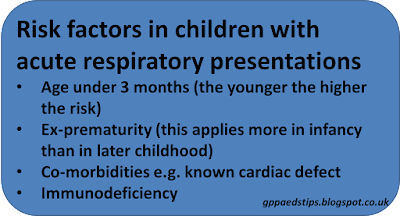 As a rule, a risk factor alongside a moderate severity of respiratory problem is ore than enough to mandate admission to hospital.   That child with croup that you were thinking of sending home- I suspect that decision will be changed when you factor in the fact that they were born prematurely at 26 weeks.

What is slightly more complicated is how risk factors apply to the child with a mild presentation.  It's complicated because the presence of a risk factor does still ramp up the risk, but its a factor applied to a very small risk in the first place.  What's more, the same risk factors that apply to the presentation also apply to the risk of being in hospital.  An ex-premature baby with mild bronchiolitis could go off, but the risk is still small.  An ex-prem baby in hospital if they don't need to be is a risk all of its own.

The decision about what to do with a child who has a mild respiratory problem but also has risk factors is a difficult one.  It is a decision best made by an experienced clinician who understands the way that the particular risk factor interacts with the illness and knows the pitfalls associated with it.  If you're not sure, refer or discuss the case.  This may be a good opportunity for an experienced primary care clinician to share that decision with an experienced paediatician via a telephone consultation.

Finally, there are red flags.  Although independent of the apparent severity of the presentation, these features will usually mandate referral or admission.

A good example of a red flag feature would be a 4 month whose clinical examination is consistent with mild bronchiolitis.  If the accompanying adult says that the infant had an episode of suddenly becoming pale and floppy earlier that day, this should be treated as a warning sign. 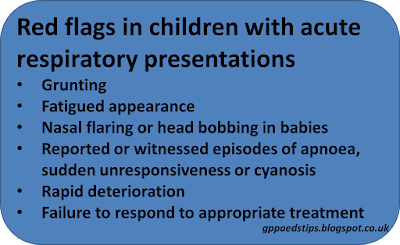 Bringing those three dimensions together will give you the answer to the "home or hospital?" question.  It will also help the communication between primary and secondary care.  Referring a child with a respiratory problem, summarised as diagnosis, severity, risk factors and red flags is just showing off.  There's nothing wrong with that is there?