Henoch Shonlein Purpura - Who, What, Where and When?

In Paediatric Emergency Medicine in the UK, it is often the case that a referral requires me to choose between more than one specialty.  For example cuts on the face (the ones that require suturing under general anaesthetic) could be referred to either plastic surgeons or maxillofacial surgeons.  Hand fractures are sometimes looked after by the orhopaedic surgeons (note use of their Sunday name) and sometimes by plastics.  Now that I think about it, the overlap almost always involves plastic surgery.

The decision about who to refer a patient to will depend on various factors.  These include resources, availability and the particulars of the case.  Matching the child and the illness (or injury) to the right person to follow the case up is part of the art of Primary Care.  After much thought and consideration, I've decided to refer children with Henoch Schonlein Purpura (HSP) to the very best.  I refer them to their General Practitioner. 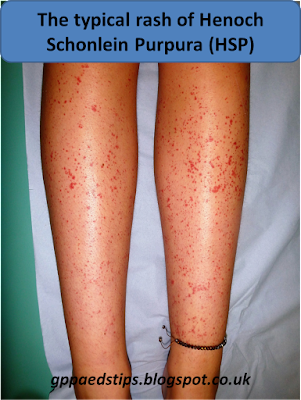 (Ankle bracelet not included.  See in store for more details)

The reason for this is that General Practice does two things better than any other specialty.  General Practice excels at avoiding the harm done by unnecessary tests and treatments, and (in my opinion) no other specialty in medicine is so good at providing the continuity needed to monitor a condition.  This allows the patient to receive appropriate care while at the same time having an experienced clinician involved who will intervene if needed.  For uncomplicated HSP, that is exactly what is needed.

HSP is the most common vasculitis in children.  Nobody really knows why children get it but the number one suspect is of course 'recent infection'.  These are always getting the blame for mysterious childhood illnesses.  If you ask me, I think it is institutional infectionism.

HSP is best known for causing a purpuric rash on the buttocks and lower limbs,  While this is the typical rash, atypical rashes are pretty common.  The thing that is most consistent about the HSP rash is the following triad: 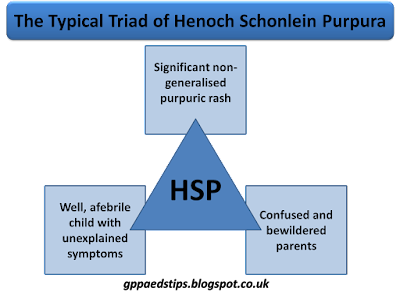 HSP is a clinical diagnosis.  It is usually identifiable through a typical presentation and because other possible causes of non-blanching rash can be ruled out clinically.  Sepsis, leukaemia and immune thrombocytopaenia are some of the possibilities that should be considered if the presentation is not that of typical HSP, or if the child is unwell, or anaemic or has splenomegally (etc. etc.). 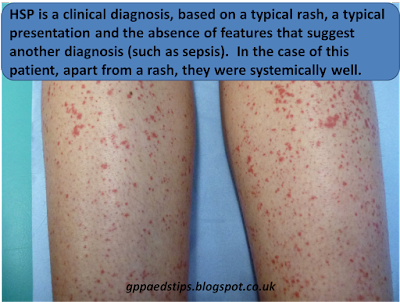 It is also worth mentioning that not all children have the courtesy to present with their symptoms in the correct order.  Everyone know that the rash should come first.  Some children choose to ignore this and complain of aches and pains before the rash appears.  Also, before the rash becomes purpuric it can start out as non-specific erythema or even look a little urticarial.

I am often asked if blood tests are needed for a child when diagnosing HSP.  My answer is this: 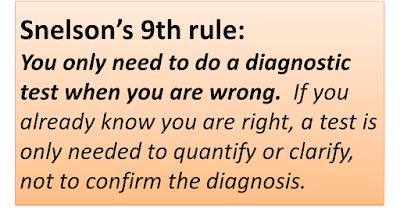 For example, I don't do CRPs to diagnose sepsis.  I use a CRP once I have diagnosed sepsis because that will help in the ongoing management.  In injury, I use X-rays where it is probable that the X-ray will alter my management.  I don't use CXR to diagnose pneumonia.  I use CXR if I suspect complicated or atypical pneumonia.  In HSP diagnosis, tests are really for uncertainty in those cases where the presentation is ambiguous or atypical.  If the presentation is unambiguously HSP, no diagnostic tests are needed.  There are tests to be done but those are screening for complications.

Most cases of HSP follow a benign course.  The rash persists for several weeks and there many children experience aches and pains in their legs and abdomen.  However, symptoms other than the rash will typically settle in the first week or couple of weeks.  Things don't always go this way though.  There are four possible ways for the course of HSP to be problematic.

Pain is a funny thing and in some cases of HSP, despite a lack of significant complications, some children and young people get severe pain (despite good doses of simple analgesia) in their legs or abdomen.  These children should be referred acutely to be seen by a paediatrician.  This is both to enable management of the pain and to look for more significant complications.

I've said that leg and abdominal pains are fairly common symptoms of HSP.  It is also true that everything in paediatrics has an evil twin.  In the case of leg pains, it is possible for HSP to cause a significant polyarthritis.  If a child has swollen joints, the pain is severe or they develop a significant limp - refer.

Similarly, if a child with HSP shows signs of severe abdominal pain, consider the possibility that they have developed one of the most significant complications of HSP - intussusception.  Other signs might include pale episodes and blood or 'redcurrant jelly' in the stools.  With or without these other signs, assessment by a paediatric surgeon is urgently needed if abdominal pain becomes acutely severe.

Almost anything that can go wrong can go wrong in HSP.  Involvement of other organs than kidneys, skin, bowel and joints is rare.  Atypical symptoms such as headache or chest pain should be taken very seriously and the child should be referred acutely.

At some point, all of these factors will lead to a decision about where the child is managed.  I think that the decision usually looks like this: 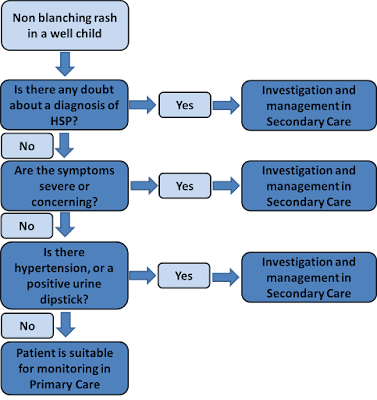 There is nothing mandatory about referring a clear cut case of HSP at first presentation.  However, most GPs that I know would prefer an initial assessment in secondary care, even if the child is extremely well and has no symptoms with their non-blanching rash.

While aches and rashes are what cause children and parents to lose sleep over HSP, it is the possibility of renal complications that usually worries the clinician.   A significant chunk of children who have HSP will develop a mild nephritis.  A smaller number go onto get a significant nephritis and a small number develop severe, kidney-threatening nephropathy.  Don't worry too much about the numbers as they don't really help in a case series of one.  What is true is that it is very likely that the child in front of you will either never develop a renal problem, and if urine dip flags something up, it is most likely to be a transient mild haematuria or proteinuria.  In order to identify those cases of silent but significant nephritis, monitoring is needed for all cases of HSP.

Exactly how much monitoring is needed is slightly unclear.  Advice is based on clinical experience, common sense and a bit of logic.  If you put those things together, you might come up with this: 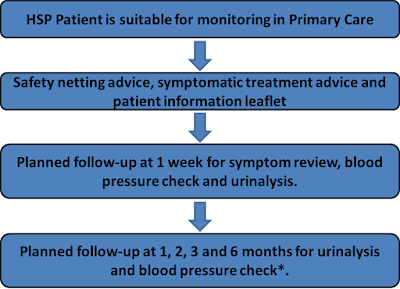 This is followup strategy is based on the well child, who has no significant haematuria or proteinuria at any point.

What this aims to do is detect renal involvement early, while avoiding any OCD type behaviour (such as daily urine dipsticks).  The length of follow-up is debatable but is based on a cohort study that showed that no child with HSP developed renal involvement after 6 months.  Roughly half the guidelines from big centres recommend follow up to 6 months and half say 12 months.

There are those that advocate longer followup (including lifelong annual reviews) for all cases.  However, I suspect that there is a significant effect of bias driving that.  If a child has had a complicated case of HSP, this may well be warranted, but if the course of the illness was benign I doubt that they will develop late complications.  The Nottingham renal unit recommends lifelong monitoring if everything else has been normal but there was at least one occasion where the urine dip showed ++ or more of protein. (1) This stratification allows for the possibility of nephropathy in selected cases rather than ongoing screening for all.

The need for a blood pressure check after the first couple of visits is also debatable (thus the *).  By continuing to check BP after it has been normal on two occasions, are we saying that the child could have had renal involvement severe enough to cause hypertension, yet this never showed up as a positive dipstick?  This seems very unlikely to me and I have never found a paediatrician who has seen such a thing happen.  Despite this, all guidelines and review articles that I have seen recommend that BP is checked at every visit.

This brings me neatly onto the final thing that might cause a clinician to feel that the child needs more investigation and management than can be given in Primary Care.  In some cases, the course of HSP does not follow the typical one of a few weeks of rash and a few days of other symptoms.  The symptoms might continue for months, or relapse after initial remission.  A mild relapse is actually quite a common occurrence in HSP and worth warning the family about.  If a relapse is severe or prolonged I would suggest that these children also need to be referred.  The paediatrician will need to review the diagnosis (in case the reason for an atypical course is that the diagnosis is wrong) and consider whether to investigate e.g. for an autoimmune cause of the rash.

Q. Does the child need blood tests at presentation?

A. Only if there is diagnostic ambiguity or if the urine dip/ BP is abnormal.

A. No, but they may have a role in treating complications of HSP. (2) Other interventions that have found to be unhelpful include antiplatelet treatment or immunosupression.


Q. What counts as hypertension in a child?

A. This is difficult question to give a straight answer to.  It's not a lack of people coming up with definitions that is the issue.  It's more that we don't know much about what levels of hypertension cause what effect in the long term.  Most guidelines go for something like systolic BP >95th centile on three occasions.  It is important to use the correct size of BP cuff for the size of the child and to use an appropriate reference range. (3)


Q. So should I be checking BP at every visit even if the urine has been normal (no more than a trace of blood and no more than + protein) on every test?

A. If you didn't, you would be going against all the guidelines in existence.  I still haven't had a good explanation as to why it is really necessary, but nor have I convinced others that it is unnecessary, so for now you should keep on doing it.


So in summary, managing HSP is relatively straightforward.  After initial assessment, most can be monitored by their GP.  Some will need to stay under the care of a paediatrician and a small number will need to be referred on, usually to a nephrologist.  For the uncomplicated cases, there is no absolute certainty about often or how long to screen for renal involvement, so guidelines have to be mostly based on pragmatic expert opinion.

So, who, what, where and when?  Me, you and maybe them doing as much nothing as possible until we are sure that everything is OK.  Simple really.


I would like to express my deepest gratitude to the young person who consented to have photos of her HSP rash used for this purpose.  Thank you.