You Better Think! - A three dimensional guideline for recognising the unusual diagnosis in the ill child (including Kawasaki disease)

When assessing ill children, it is easy to presume that the problem is an uncomplicated viral infection.  Most of the time it is.  The odds are severely stacked against a more significant diagnosis to the extent that it is easy to become overly presumptive.  This, combined with the fact that a simple and benign illness will share many features with a rare or dangerous illness means that spotting the unusual or harmful diagnosis is very challenging indeed.

Much of the work done on congitive and diagnostic error takes the errors and then works backwards.  For a long time there have been reports on the number of deaths in healthcare that are related to error. (1)  These are reverse-engineered and start from the point of the problem.  People died - what is the evidence that there was any flaws in the care/ diagnosis/ treatment?  This is very different from the alternative approach of:  People had a healthcare episode- what happened next?

Outcome based stats are dangerous in that respect.  If you have 10% more adverse events than your colleagues but see 50% more patients (because you're awesome at your job) then please come and work with me.  You might flag up as a dangerous clinician if someone looks purely at incidents rather than the big picture.

I think that the most effective clinicians are those capable of recognising well children and capable of changing gear when something is unusual.  This is sometimes referred to as type 1 and type 2 thinking as per the model descibed by Croskerry. (2)

Using this model, we are most efficient when we are thinking inuitively and making gut feel decisions (type 1 thinking) and most effective at making the more complex diagnoses and managing the most dangerous scenarios when we are more considered and thorough (type 2 thinking).

Let's use this example to consider a child with non specific symptoms such as fever, rash, lymphademopathy and pharyngitis.  The reasonable but also dangerous assumption is that the child has an uncomplicated viral illness.  The possibility of another outcome is small but the consequences of missing an alternative diagnosis are great.  So, we need to use type 1 thinking to be efficient and be prepared to go into type 2 thinking when needed.

The obvious questions are then, what am I looking for and when do I look for it?  Guidelines on the subjects of febrile children, URTI in children and recognising complications such as sepsis tend to be written as if the problem was one dimensional or that the same guideline could be used in every circumstance.  This is one of the reasons that guidelines can sometimes frustrate.  Clinicians don't think that way, so it jars when a "fits all sizes" guideline over-simplifies such a complex process.

Here's an example of something that is useful but fairly simplistic. 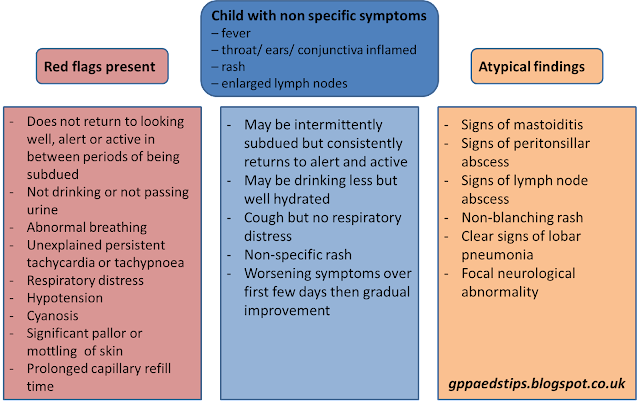 This tells us what normal and abnormal look like.  It does very little to tellus what it all means.  Stopping here would be fine if we are just going to tell people when to refer or not.  To do that safely, such guidance will invitably err on the side of caution.

What it fails to do is to address what may be causing the red flags or atypical findings.  While a diagnosis is not necessesary in order to make a decision to refer, having a suspected diagnosis helps us to get the right child to the right place at the right time.

Lets take two of the possible complex and dangerous diagnoses as examples.  A child has a febrile illness with conjunctivitis, phayngitis, swollen lymph nodes, a rash and is pretty miserable.  Good to know.  If I told you that the onset of symptoms was within the past 24hrs, would you consider Kawasaki disease? No.  If I told you that it was day 6 of the illness and that for the past 3 days the child was neither better nor worse would you think that the diagnosis was likely to be acute sepsis? No, but can we get a guideline to help us get there?

Since it is a factor in our decision making, we could add in the dimension of time and disease progression to our guideline.  If we did that I think that it could look something like this: 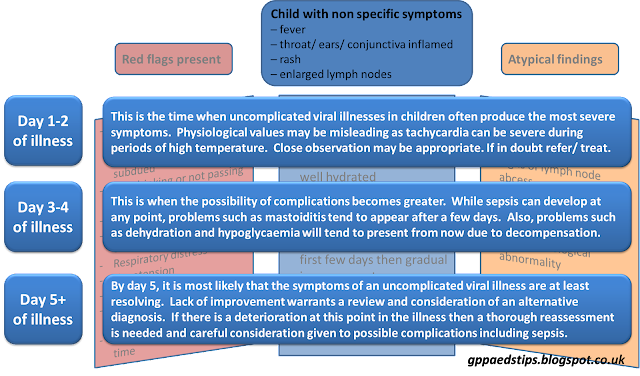 Even adding this dimension doesn't fulfil our need for something which maps to our way of thinking.  We now have the bit that focuses on the child in front of us and the bit that takes into account the real world where patients present in different ways, but many guidelines fail to take into account the fact that different diseases behave differently.  Worse than that, the differences can be subtle.

Guidelines often struggle to deal with the fact that medicine is a complicated subject.  Do you write a guideline for a clinical scenario (e.g. febrile child)?  If so, you need to include every possible cause and when to think of it.  Do you write your guideline about a specific disease (e.g. Kawasaki disease)?  If so, how will people know when to use the guideline?  If they have looked it up, they are 90% of the way there and the guideline is going to be more useful as confirmation and treament advice.

For these reasons, guidelines will never be a substitute for the need for clinical knowledge and understanding.  Our child with non-specific symptoms guideline needs to have another layer - specific diagnoses, what they look like and when to consider them. 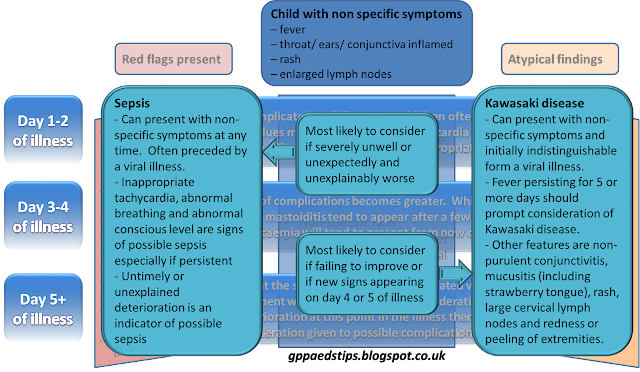 We need guidelines to be both simple in order to be practical and complex because nothing is simple.  We need them to be based on real-world clinical practice and to be honest about the uncertainties inherrent to that.

Disclaimer: Over and under-thinking are both perfectly acceptable in the right circumstances. 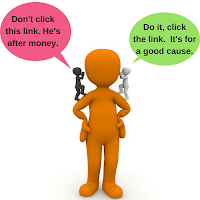