It’s always nice when a clinical assessment ends with a clear way forward.  If a child presents in the community with a severe exacerbation of asthma, there are clear guidelines for pre-hospital treatment and referral.  There is usually no dilemma in what to do if a child presents with fever and signs of meningitis to Primary Care.  Similarly, it is usually obvious what to do with a child brought with signs of an uncomplicated viral upper respiratory tract infection.

What is more challenging is when a child has conflicting or paradoxical signs and symptoms.  This is especially true when all the evidence points towards an illness that can and should be managed in Primary Care, yet one small piece of information is inconsistent.  What should you do with that?

Let me give an example:
A four year old boy presents with a history of diarrhoea and vomiting for 24 hours.  It is now 6pm.  The history of the illness is typical of a straightforward viral gastroenteritis.  The child looks well and is alert, interactive and surprisingly willing to mobilise when he spots the toys available.  He has wet mucous membranes and has no signs of dehydration.  Abdominal examination is normal as is the rest of his systemic exam.  All physiological observations are normal.  There is an unexpected snag: the parent with him reports that he has not passed urine since he went to sleep the previous night.
So, with all but one piece of information in favour of a pathway that involves symptomatic management and oral hydration, what should one do?

Should this child be referred to Secondary Care?  I think you will get different answers from different people for this kind of situation.  On one hand the reported lack of urine output is a clear red flag.  On the other hand it is completely at odds with the wellness and clinical hydration of the child.  The child could be referred, but would that change anything?

There are many reasons for referring a child to Secondary Care.  I the initial examples, the reason is for undisputable and necessary management.  If the child is referred in the case of the paradoxical urine output, there may be an assumption that someone in the hospital will be better able to make a decision than the person making the referral.  This may or may not be true.  If it is true, it is probably not because they will have further information that could not have been obtained by the referrer.  It is probably not because the person receiving the referral has some sort of child assessment super power.  They may not even have more confidence in their gut feeling (that the child is fine and can safely be managed as an uncomplicated gastroenteritis) than the referrer.  What they will mostly have is their uncertainty to add to the referrer’s uncertainty.

Let’s say that you do refer this child.  Let’s assume that I see them shortly after you have seen them and that nothing has changed apart from the child having a bit more to drink in the meantime.  I now have the same information that you had and the same dilemma: to go one way or another.  I can do blood tests and consider intravenous fluids, but my gut tells me that this is an unnecessary torture of a child best managed with analgesia and oral fluids.  I could give symptomatic treatment advice and safety-netting advice and send them home but that is difficult to justify in the face of the reported anuria.  I could keep them for observation, but what would be the end point of that or the purpose.  If I am confident enough to do no active management in hospital, why am I keeping them?  Observing moderately unwell children while awaiting an expected move towards wellness is one thing but observing a well hydrated and clinically well child to prove that they are going to pass urine seems to have little value over allowing the same outcome at home.

When faced with conflicting information, it is important to have a way of deciding which information carries more weight and has more validity.  In ill children, it is often useful to categorise according to effort and efficacy.

Effort is the body’s way of responding to illness.  There is usually some sort of physiological response to illness which is often a way of compensation for an effect of the illness.  Efficacy is everything to do with the end point of how effective the increased effort is.  In other words effort tells you that the child is trying to cope with an illness and efficacy tells you if it is working.  A good example is the happy wheezer.  If an infant with bronchiolitis has an increased respiratory rate, that tells you that there is some effort to compensate for what is happening in the chest.  The smile tells you that this is being effective.

Inevitably, efficacy is more important than effort when it comes to clinical decision making.  It’s not that the compensatory efforts should be ignored, it’s that the effect of that effort is of greater importance. 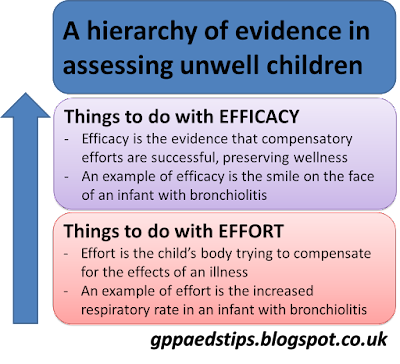 So in this case, I would say that whatever is happening with this gastroenteritis, all the evidence that I can see tells me that it is having the desired effect.  The child is well and has no signs of dehydration.  Even if we were to believe the lack of urine output (and to disbelieve is not to disbelieve the parent) then a reduced urine output would be part of an effort to appropriately retain fluid during an illness.  I’ll say that is being quite effective in this case.

Do I have any niggling doubts?  I am certainly not dismissive of the contradictory report of anuria.  I am aware of my own fallibility and would only chose to ignore the lack of history of good urine output if I felt that to do so was in the child’s best interests.  In short, I would love complete certainty but I’m not being given that so I can either make a decision or find another way.  What I don’t want to do is a test or treatment that I don’t believe in.

But it isn’t strictly true that I’m no further forward than the referring clinician.  After all, I’ve got their uncertainty to add to my own.  If I’m lucky, it will be clear from the referral that when you referred this child for further assessment, you were very happy with the hydration and general wellness of the child.  You, like I am now, were perplexed more than concerned by the lack of history of passage of urine.

I have no super-powers and no particular clinical skills that you don’t have.  I am also lacking a 100% certainty about this case, but it’s time to make a decision.  Adding my certainty to your certainty means that between us we are 198% certain that there is nothing about this child requiring a blood test or a night on an intravenous infusion.  Let’s go with that then shall we?
There’s nothing wrong with referring a child for a further opinion when there is some uncertainty about the best management.  It is particularly helpful to know what the opinion is along with everything else in the referral.  That way I know that my uncertainty is the same, which in itself is useful information.

There’s also nothing wrong with trusting your assessment, in the knowledge that in secondary care we may well have little to add other than another appraisal of the same paradox.  Of course there is always the phone call to discuss the uncertainty.  How much fun would that be?

Disclaimer: I'm not even certain what I'm disclaiming.