Should I prescribe antibiotics for a child with otitis media and discharge from eardrum rupture?

The answer to that question is much more complicated than most guidelines will lead you to believe. 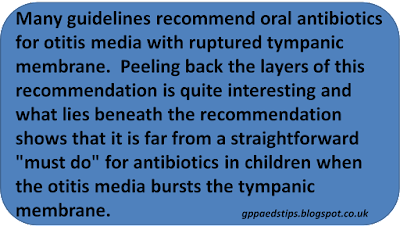 The headline statement recommending the use of antibiotics in this scenario has buried the evidence in multiple layers of interpretation.  To get to the truth, we have to look at the lierature ferred to in the decision to make that recommendation.

Guideline writers put in huge amounts of work looking at all the available evidence and then turning that into simple statements.  When these recommendations are truly simple and make sense in clinical practice, we tend to just follow them.  In a recent Twitter poll of over 600 people, this was far from the case. 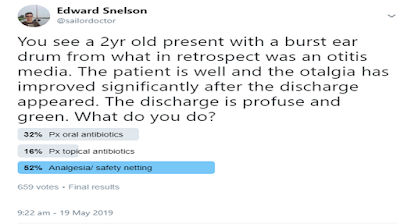 First of all though, let’s look at simple otitis media without rupture of the eardrum (tympanic membrane).

Otitis media is a common childhood infection.  It starts off with a cold and then progresses to an infected middle ear.  It is important to be aware that neither ear pain nor a red tympanic membrane is diagnostic of otitis media.
The evidence for antibiotics being effective in the treatment of otitis media is pretty poor.  In a Cochrane review of this subject (1) it is reported that antibiotics have no effect on pain at 24 hrs and that you need to treat 16 children in order to see one of those children having less pain at 2-3 days.  In line with previous discussions re antibiotics, the same review noted that antibiotics had no effect on the rate of complications.  With a similar number of children being made unwell by the antibiotics, it is questionable what their role is at all in uncomplicated otitis media. 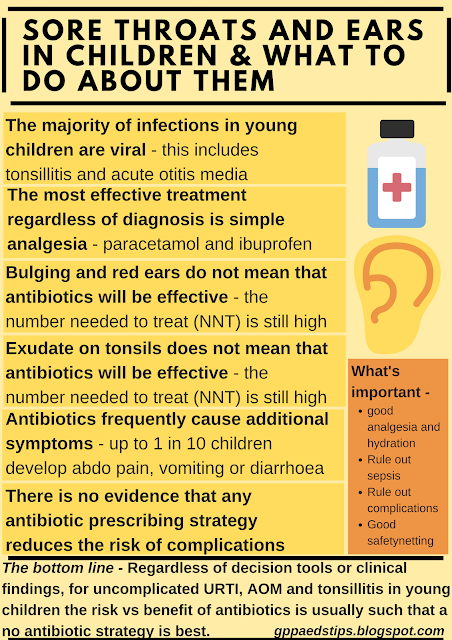 Many guidelines list exceptions to this rule.  One that often confuses clinicians is the scenario of the child who presents with a sudden onset of purulent discharge from the ear.  In these circumstances, there is often a recommendation to treat with antibiotics.

So where does this recommendation come from?  Peeling back the layers is quite interesting and what lies beneath the recommendation shows that it is far from a straightforward "must do" for antibiotics in children when the otitis media bursts the tympanic membrane.

Starting with a commonly cited recommendation, the NICE CKS for acute otitis media (2) states "...immediate antibiotic prescription could be considered in children... ...of any age with both AOM and ear discharge..."  The basis for this recommendation is cited as the aforementioned Cochrane Review (1).  This Review states "Antibiotics are most useful in children under two years of age with bilateral AOM, or with both AOM and otorrhoea. For most other children with mild disease in high-income countries, an expectant observational approach seems justified."

The Cochrane Review conclusion itself is based on a paper (3) that looked at the features that made it more likely that antibiotics would have an effect.  In the case of otitis media with otorrhoea, it found that the NNT improved to 3.  That sounds good, so why would most people avoid treating?

The answe is simple.  In the published evidence, the effect of antibiotics was still to do with symptom (mainly pain) improvement.  That is clinicaly important because in many cases pain is resolved when the discharge occurs.  Presumably this is because the pain was due to the stretching of the tympanic membrane rather than due to the inflammation of soft tissues.

If the pain is resolved, the NNT to treat becomes irrelevant.  How can you improve pain that has gone away? Even if there is still some discomfort, if this is controlled by analgesia, isn't that a better option than antibiotics?

Therefore, when a child presents with otorrhoea due to otitis media, rather than faithfully following a recommendation to give antibiotics, we consider the applicability to the child in front of us.  If the pain has gone or is easily controlled with analgesia, we can hold off.  The appearance of the discharge may be alarming but it is often the beginning of the end of the illness.

What about topical antibiotics?  These are also frequently recommended.  In answer to these recommendations I would point out that neither the NICE CKS nor the Cochrane review have recommended antibiotic ear drops for this clinical scenario.  In addition, there is BMJ paper (4) that states "Topical antibiotics are associated with fewer systemic side effects and a lower risk of antibiotic resistance than oral antibiotics, but there is no strong direct evidence to support their use in this condition."

So there you have it - the bottom line: 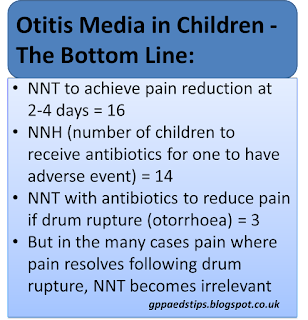 Once the recommendation to treat is deconstucted, it all makes sense.  In this case, it seems that taking it apart and looking inside reveals why most of us still don't give antibiotics when nasty green stuff starts pouring out of a child's ear.

Disclaimer - One time I took a guideline apart and couldn't work out how to put it back together. It's still in my cellar.

Mental health problems in children and young people (CYP) are common and on the rise.  Identifying these problems in CYP is particularly challenging due to a variety of barriers.  Some of those barriers exist within ourselves (misconceptions) or our working environments (time pressures).  Often the barriers come from the child or young person.   All of these barriers can be overcome.  Let’s look at how that is possible.

The first place to start is with ourselves.  We need to make sure that our attitude towards CYP and their mental health is such that we are open to see and hear the signs that indicate what is going on.  A positive attitude is also essential so that the CYP and their family are likely to want to disclose what they need to in order to get a good picture of what is happening.   All the usual things that apply to working with young people apply in a mental health assessment but are more important than ever due to the patients mental state. 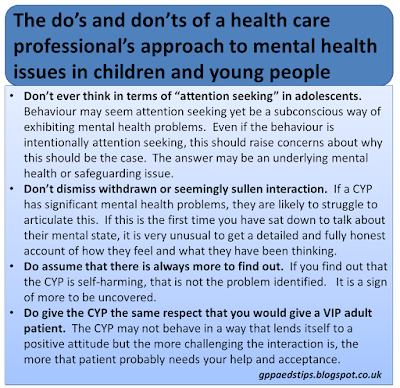 Next we need to look at our working environment.  The time pressure issue is a big one.  The bottom line is that unless we find a way to make time for mental health presentations, we can’t expect these contacts to be effective.  There are many other environmental factors to consider which are key to helping CYP access the help that they need. 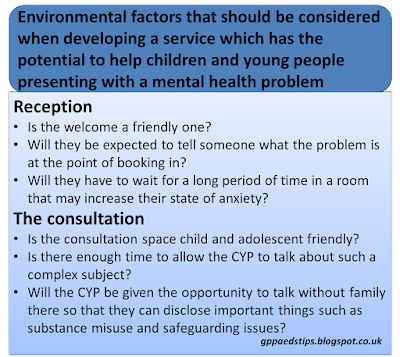 Finally there are the barriers that seem to come from the CYP.  As suggested above, it is a good thing to see any such barriers as expected.  The worse the situation, the bigger the barriers are likely to be, and the greater the need to have these barriers overcome.  The right attitude and environment are both hugely important in overcoming these barriers.  It also helps to name them with the patient and their family.  That goes something like this:

With the family present- "I know that it is really difficult to put how you feel into words.  It’s also usual to be thinking that if you tell me what you’ve been thinking, I will think you’re crazy.  I won’t.  Anything that you can tell me will be really helpful.  Just tell me in your own words and take your time.  You’ll get a chance to talk to me without your family being there so feel free to save anything that you’d rather talk about without them there for then."

With the young person on their own – "We always give people a chance to talk about what is happening without their family sitting in.  That’s important for a couple of reasons.  Firstly these things are complicated and quite often young people feel that their family either don’t understand what’s happening or have strong opinions that make it difficult for you to say things the way you see them.  Here on your own you can talk about things and know that I’m just interested in what you want to tell me about what’s happening and how you are feeling.  Secondly, there are some times that there are things that really need some privacy to be able to talk about.  That can be things that you feel you can’t tell your family about, like taking drugs, or it can be things that I need to know such as if someone is harming you in any way.  I’ll treat things you tell me with confidentiality wherever possible.  If someone is harming you then I would need to act on that to keep you safe."

Even when you go through all of that, it is sometimes the case that all you get is shrugs and a marked lack of usable interaction.  At that point, you have another ace to play.  It is a valuable piece of equipment in CYP mental health assessment and it looks like this: 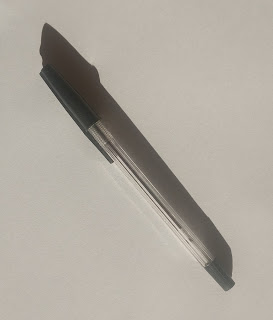 Giving the patient the opportunity and the space to write instead of speaking is a game changer in ways that you might not expect.  In a spoken interaction, CYP in a mental health crisis are likely to find it difficult to find the words to say how they have been feeling and thinking.  They will worry about the response that they will get to what they say.  This fear of being appraised can be paralysing.  Even if the person they speak to does everything perfectly in terms of verbal and non-verbal communication, the CYP may over-think everything they see.  Such is their hyper-acute mental state that this happens easily.  “They just frowned slightly.  Does that mean that they don’t believe me?  Perhaps it means that what I said is completely mental.”

A piece of paper doesn’t have an opinion and there is no response to misinterpret.  It doesn’t rush you and you don’t have to worry about getting your words right.  You can write it down and see if it looks OK before anyone else sees it.  A piece of paper accepts everything you put on it without interrupting or giving your family the opportunity to tell your story differently.

Try it out as a strategy the next time a child or young person is struggling to communicate in a mental health consultation.  You might be very surprised and pleased with the results.