We've come a long way in terms of reducing unnecessary tests in paediatrics.  It is within my career that it was standard to obtain a chest X-ray (CXR) for any child presenting with their first episode of wheeze.  Now, such an approach is seen as outdated.  This is a good thing.  In fact the vast majority of acute and sub-acute respiratory presentations in children can be managed without needing a CXR.

In some ways it was a lot easier to know when to do a CXR 20 years ago.  The answer was pretty often.  Every lower respiratory tract infection (LRTI), every first episode of wheeze and every persistent cough tended to result in a CXR.  Now, we should rarely do CXR in those circumstances.  Rarely doesn't mean never though, so how do you know if you're doing too many?  Enter the Wimbledon Rules for CXR in children…  I’ll come to that later.  First, I’ll explore a little bit about the complexities of doing CXRs in paediatrics.

The problem with CXR in children is that it can be misleading.  The most common scenario in which this is true is for the wheezy child.  Wheeze is a strong negative predictor of pneumonia(1).  This makes sense clinically when you think about it.  If an infant or child has restricted lower airways, that is reason enough to have respiratory distress.  If you then take a section of lung out of action, you won't be wondering if they might have a problem.  It is likely to be very obvious from how unwell they are and how abnormal their breathing is.  As a rule, children with tight airways and pneumonia together are in a very bad way.

While wheeze is a strong negative predictor of pneumonia, a CXR in wheezy children is rarely clear.  In many cases there is a patchy white area on the CXR.  This is often at the right heart border, or as it is sometimes called, "the area of radiological romance."  If you do a CXR too often in wheezy children, this will happen fairly frequently and it may be difficult to ignore.

Even if a child does have a LRTI, CXR is not necessary in many cases.  The British Thoracic Society (BTS) guidelines for community acquired pneumonia (CAP) recommend the following:


These recommendations are based on two important facts.


So when should we do CXR in children?

Let’s start with the times when CXR is not recommended routinely:


CXR is usually most helpful in children in these circumstances

Therefore we need to get a balance between clinical common sense and judicious use of CXR in children.  A simplistic approach which could be applied looks like this: 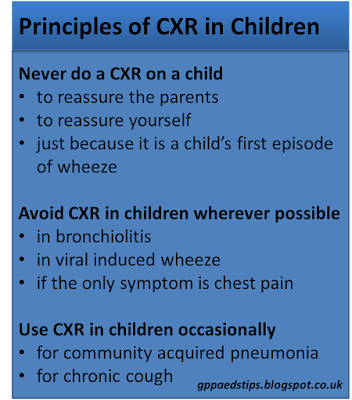 Whether a CXR is necessary or not is highly subjective.  Ask ten clinicians and you'll get ten different answers, due to the human factors.  It's a little like an umpire in a tennis game.  They're not right all of the time.

For this reason, in a major tournament tennis game, players are allowed to appeal.  However the players appeals are limited.  If they appeal against a decision and that appeal is upheld, they retain the number of appeals that they had before the appeal.  So wrong once, they can appeal again.  Wrong twice and they're out of appeals.

Having a CXR result in a child which doesn't alter our clinical decision, or which dysfunctionally suggests a pathology in the absence of a congruous clinical picture should make us rethink our approach to our use of CXR.  If we're going to apply the Wimbledon CXR rule, when we get one completely normal CXR (or one with a non-descript small white fluffy patch which makes us want to give antibiotics when we wouldn't have done so before the CXR) we should think about more cautious use of CXR. If we get two, we should stop and re-read the rules.

Just as tournament tennis players don't have an unlimited number of appeals, we shouldn't think of CXRs as an unlimited diagnostic resource.  We should use them when they are most likely to change our game.

Disclaimer: If you turn the umpire off and back on, the number of appeals resets.

Mugglevision - Being a clinician to a child with learning difficulties

We all see the world through our own eyes.  It is normal to assume that the person we are communicating with has a similar enough perception of the world to mean that the rules of communication and interaction are fairly standard.

What if your patient has a very different perception of the world to the one you have?  Many of our patients fit into a group that experience the world quite differently to us.  This group includes children and young people with what would be classified medically as having a syndrome, neurodisability, learning difficulties, special educational needs or other such labels.  The trouble with labels is that they are just that - a label.  Labels can be dehumanising and sometimes irritating.  So, to avoid this trap and because it facilitates a theme, I shall refer to any such child as magical.  That makes you and me the muggles in the encounter. 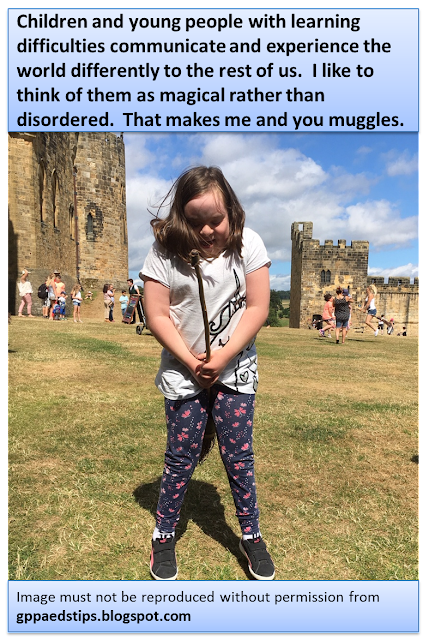 When a muggle meets a person from the magical world, it can be a little difficult to know what to say or do.  That's normal.  What can happen in such circumstances is that the clinician (muggle) retreats to a place of safety, concentrating on the medical aspect of the consultation and communicating primarily with the family (who are also likely to be muggles).

There is a better way than this.  Being a muggle doesn't mean you have to worry about getting it wrong.  If you ask the child and their family what works well, they'll be happy to tell you.  Here are a few of the things they are likely to tell you:

What the (magical) young people tell us: 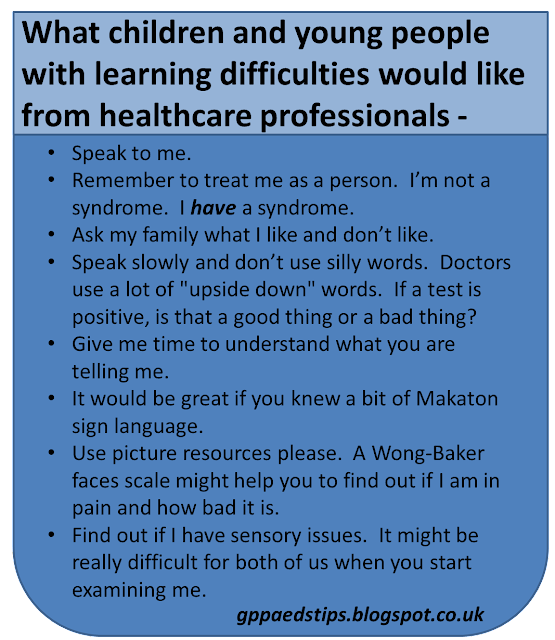 What the (muggle) family of the (magical) young people tell us: 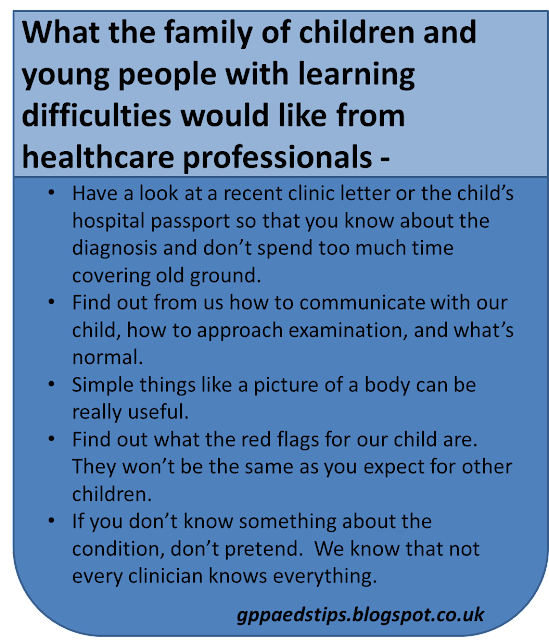 Next time you encounter a child (regardless of their label) who has learning difficulties, have these as useful rules of thumb.  Each child is different, so if your not sure how best to behave with a magical person, ask them and the muggles they bring with them.

Many thanks to Liz Herrieven for help with this post.