If you’re unsure about how to manage viral wheeze in children, you’re not alone.  There is much confusion about this common paediatric presentation.  The uncertainty about best management exists for several reasons. 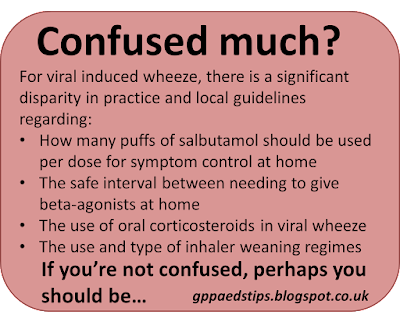 When you see a wheezy child, you want answers to all these questions.  So here we go, one at a time.

Question 1 – Does this child have viral induced wheeze?
If the child in front of you is snotty and between the ages of 12 months and 5 years then the answer is “almost certainly.”  Almost is somewhat unsatisfactory so here is the breakdown of that statement.

Wheezy children under the age of 12 months usually have bronchiolitis, a condition that is also induced by a virus but involves wetness of the small airways rather than bronchospasm of the larger airways.


It is worth knowing that there are wheezy presentations in this age group that can look a lot like viral wheeze.  These include bronchomalacia, acute allergy, and cardiac failure due to e.g. acute myocarditis.

Question 2 – What and how much treatment should I give to a child with viral induced wheeze?
Treatment of acute viral wheeze is often extrapolated from asthma guidelines.  Most, such as the BTS guidelines, stratify according to severity, mainly based on signs of increased work of breathing.

Other factors to consider include the child’s previous history of wheezy episodes.  It is reasonable to treat children who have progressed to needing a critical care level of treatment on previous occasions more aggressively in terms of treatment and more cautiously in terms of admission.

It is also well worth considering is whether the child has received effective treatment prior to presentation.  If the child has either been given no inhaled beta-agonists at home or the delivery has been ineffective, they are more likely to respond to a more conservative dose of inhaled treatment.  If they have been given substantial and effective treatment at home and are working hard to breate despite this, they are more likely to need a larger number of puffs to achieve an improvement.

Here is an example of how to treat an acute viral wheeze at presentation to primary care: 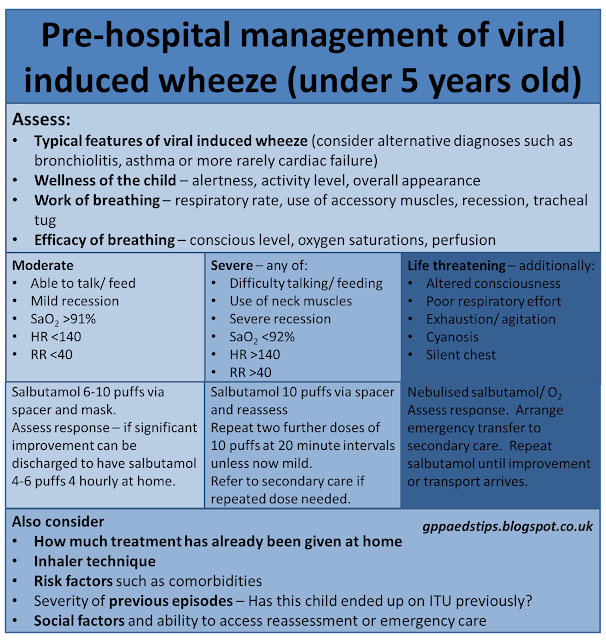 The use of oral steroids in children with viral wheeze is controversial.  Much of the available research looks at wheezing within an age group, not categorising children into phenotypes of underlying cause.  This has led to age based approaches by some and a selective approach to using steroids by others.

The best evidence (1) for the use of oral steroids for viral wheeze between the ages of 1 and 5 would suggest that the following group are most likely to have a small benefit:


One simplified application of this evidence is to say that if the child does not have asthma and does not require in-patient treatment, there is too little evidence to support the routine use of oral steroids.  Note that a family history of atopy, though often used in decision making here, is not an indicator that the child is likely to benefit from steroids.

Question 3 – Should this child be admitted?
The answer to that will depend on various factors including clinical setting and local infrastructure.  In an urban primary care/ secondary care model, admission should be the norm in the pre-hospital setting for children with a moderatel or severe episode who have required significant quantities of salbutal and are not responding well.

Children whose severity is judged to be mild, and those who are moderate at presentation but respond well to their first dose on inhaled beta-agonist can usually be managed in the community.

Risk factors such as prematurity, comorbidities, pervious life-threatening episodes, parental confidence/competence and adverse social circumstances should all be involved in this important decision.

Question 4 – How much beta-agonist should the parents give if I am sending them home?
There is huge variation in practice here.  Experience tells us that paradoxically children tend to need larger doses of inhalers rather than standard or small doses.  This is likely to be due to a combination of delivery (getting all that is given to where it will count) and physics, since children’s airways have different flow dynamics to adult airways.
The majority of clinicians will recommend that the child receives 6-10 puffs of salbutamol 3-4 hourly.  Note that local guidelines vary in terms of dose and interval.  There is a certain amount of clinical judgement involved which will be influenced by the presentation and the circumstances (including the parental confidence and competence with delivery of inhalers and their ability to recognise markers of deterioration.)

What guidelines often fail to explain are the aims of treatment at home.


It is useful to tell parents that the inhalers will not treat the symptoms of the viral illness such as cough and runny nose.

Treatment failure is generally considered to be:


A further variation in practice is how people manage the issue of reducing/ stopping the inhaled beta-agonist treatment.  Viral wheeze is by definition a time limited problem.  As the effect of the virus and the child’s immune response resolve, so does the bronchospasm.  There are two main approaches to the way that people advise how to move towards stopping the inhaler.


Each approach has pros and cons.  A set weaning regime carries a risk that the parents will follow it even when the child is not ready.  A weaning regime that requires parental judgement carries a risk that the inhalers will continue to be given when not needed (e.g. to treat a cough) or that the parents will simply stop after two days and not recognise the child’s need for further inhalers.


Whichever approach is used, the risks can be managed by careful explanation of what to do, how to do it and when to divert from the plan.

References
Posted by Edward Snelson at 01:06