And now for something completely different...

Allow me a story to give some context to the world in which we now live.  Since we are currently within the centenary of the first world war (WW1), this story I'm going to tell you is one of modern times.

Three months after the outbreak of WW1, a German warship, the SMS Emden, had been causing havoc in the Pacific.  She had captured or sunk ships running into double figures and the captain decided that it was time for the ship to have some repairs and the crew to get some shore leave.  He steamed into the island of Diego Garcia, which was at the time under the control of the British.  Despite being three months into a war between these two countries, not only was there no resistance from the British garrison but the local force welcomed the cruiser, helped with the repairs and presumably made them all tea.  Why?  Because the British Garrison didn't know that they were at war.  No information about the hostilities between the two nations had reached them.  True story.

Fast forward a few generations and think about the world that our young people live in.  Everything is fast, if not immediate.  Everything comes with an expectation (I know what a few dozen people think about the next hotel I'm going to stay in) and gets rated and reviewed.  One of the problems of modern times is that this is happening to our young people, not just to hotels and restaurants.  they are themselves being rated and given instant, sometimes brutal feedback every time they go online.

One of the known risks to mental health is any detrimental effect on self esteem.  If the world tells  a young person that they should be thin and beautiful and rich often enough, this has an effect on their self esteem.

Another problem that comes with social media is that it is a fickle friend.  Young people need to feel accepted or validated as part of a healthy psyche.  When something brings you down, it helps to have a solid person in your life to let you know that you are an OK human being.  Social media has made it possible for young people to be connected to hundreds of others.  The trouble is that what these 'friends' or followers say or don't say can be detrimental. Online interaction can be any degree of unpleasant and all varieties of negativity are seen in various forms.

Social media gives you a value.  How many online friends do you have?  How does that compare to other people?  How many 'likes' did your latest selfie get?  Why so few when someone else in your class got 300 likes? 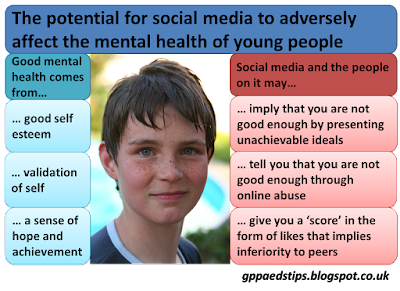 The online world brings a great deal of opportunities for young people but it also brings risk.  If a young person is vulnerable to mental illness, then the negative effects of social media can be the trigger. (1)

What can be done about the risk?  If a young person is showing signs of mental health problems then we need to be able to offer helpful advice.  The debate about how to intervene is never-ending.  This week, Facebook was in the news for its new under 13 year old version of Messenger, which Facebook is currently testing.  Facebook argue that since 12 year olds simply pretend to be older online, it is preferable to have a safer version of Facebook, specifically designed for this age group.

Most discussions around the issue of social media and the risk to young people's mental heath centre around parental controls and managing the media.  Another way to approach the issue is to concentrate on everything but the social media itself.  Emphasise everything that is likely to have a positive effect on that young person's mental health:

To return to the original question, mental health problems in young people do appear to be on the rise.  Recognition of mental illness is just one of the challenges that we face.  Prevention and treatment are seemingly unachievable within the resources available, however we need to take the issue of mental health as seriously as we do any other group of  childhood illnesses.

It is probably unnecessary to get caught up in a debate about whether social media is to blame for the rise.  Adolescence is a time of emotional vulnerability and any trigger can be to blame for a mental illness.  The negative effects of social media are one possible trigger.  We need to be aware of this and share this knowledge with families who present with concerns about the mental health or an adolescent.

Disclaimer:  Rather than my usual nonsense, I would like to allow myself a serious footnote.  Over the time I have been writing GPpaedsTips, I have noticed what gets the most and the least attention.  If I was to maximise the numbers of shares and clicks, I would never mention mental health ever again.  Although we should indeed be interested in treating asthma and sepsis, suicide remains a leading cause of death in young people (2) and the impact of mental health problems in adolescence is massive.  Although I wouldn't normally ask, please share this post.  How else will I be a valid person if I don't get enough likes?  If I get enough clicks on this post, I promise to write about sepsis next time.