First of all, let's deal with the elephant in the room.  Medical terminology is always evolving and it is sometimes hard to keep up.  Many of us heard different terms used when we first studied medicine (such as functional or psychosomatic) for what seem to be the same clinical scenarios that are now labelled as MUS.  I don’t like perpetual re-labelling of problems. Medically unexplained symptoms, for me, is an exception to this dislike.  MUS removes the judgement of how much a problem is psychological and how much it is physical.  MUS acknowledges that there is always a combination of the physical and psychological.  How much of each component exists is neither measurable nor essential to know.  Is it 60:40 or 30:70?  I don’t know. 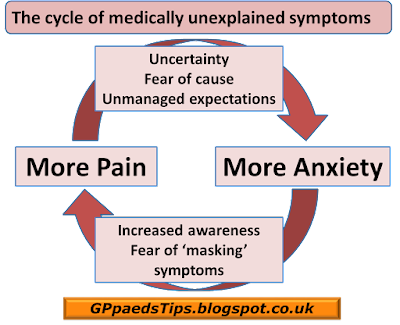 The other benefit of calling the situation MUS is that it recognises the possibility that an unknown physical cause may exist.  If a symptom has no medical explanation, the problem may be that medicine has failed to explain the symptom.  Although very few MUS scenarios end up with a eureka moment later on, a significant physical cause is sometimes found.

One definition of MUS is, "symptoms for which a treating physician or other healthcare providers have found no medical cause, or whose cause remains contested."(1)  When a young person presents with recurrent abdominal pains, once the physical medical causes have been ruled out, what we are left with is a medically unexplained symptom.  Labelling the scenario as NSAP is historical and has the potential to be revisited.

Is there anything wrong with the label of NSAP?  I can see two potential pitfalls, both of which arise from that way that it sounds a lot like a diagnosis.  The first problem is that both family and clinician may see the matter as closed.  This carries the risk that a diagnosis might be missed, especially if it is one that easily goes beneath the radar, such as coeliac disease.  This publication lists various pathologies that were found following a diagnosis of NSAP. (2)

Nor should we over-investigate.  As discussed in a recent review article on MUS in ADC (3), the problem here is the "impossibility of proving a negative."  Rather than give every child with abdominal pain an endoscopy, the middle way of leaving the diagnosis open while observing and looking for a recognisable pattern may be safer than labelling as NSAP. 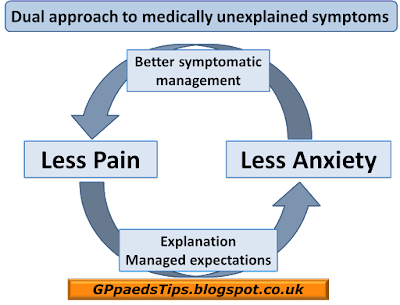 I think that this dual approach is what tends to be done with NSAP already, whether it is managed by GP, paediatrician, gastroenterologist or surgeon.  An open minded and holistic approach is essential when managing medically unexplained abdominal pain in young people.

In some cases, a cause of abdominal pain is obvious.  Common pathologies are constipation and reflux oesophagitis.  Both can be managed in Primary Care if there are no red flags and the problem responds to treatment.  Even when the cause is less obvious, the cause is often constipation, which is why it is worth really asking in detail about diet, bowel habit and the pain.  I also believe that a trial of macrogol laxatives is often a good strategy in the absence of an obvious cause.

In more extreme cases, there may be red flags such as weight loss, or bloody mucousy stools.  These children should be referred though an urgent route (inpatient or out-patient depending on the circumstances).  If the symptoms are severe enough to warrant immediate admission and investigation, laparoscopy finds a cause in about half of patients. (4)

There are also cases where there appears to be a psychological cause, often related to stresses such as school, bullying or even abuse.  It is still important to consider physical causes but there is nothing wrong with moving to address the psychosocial causes early on.

In some cases there is genuine ongoing uncertainty.  The usual pathway for these children is to refer to paediatric surgeons, paediatrics or paediatric gastroenterology for further investigation.  After this, clinical psychologists are often involved.  I don't know what they do.  Witchcraft or something.

Disclaimer - If you can't explain it, it's not my fault.   You're clearly not trying hard enough.

Sepsis in Children – What is in a Name? 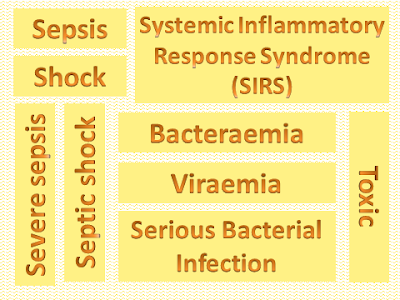 I was recently asked, “How do you recognise sepsis?”  Answering that question would be so much easier if only we knew what sepsis was.  A recent convention of experts recently met in an attempt to define the term. (1) What they came up with was: “life-threatening organ dysfunction caused by a dysregulated host response to infection.”  All we need now is a definition of organ dysfunction and we’ve got this thing sorted.  (Sigh)

Sepsis is increasingly in the media and we are frequently told that:

But coming back a step, I just said that sepsis is an unknown quantity.  How can any of the above be true then?  Unfortunately they, like all lies, have a basis in truth.  So the best thing is to look at a few facts and opinions and then, you can decide what to do with all of it.

We are poor at recognising sepsis in children

Sepsis is diagnosed at the point in the illness when it is clear that the infection has had a significant dysfunctional and systemic effect.  Since it is always preceded by an infection that is having some effect, that moment is difficult to define.  As a result some of the following things may occasionally happen:


Sepsis, to be clear, is a response to infection.  It is a subjective global assessment of the effect of an infection on a child.  Unfortunately this does not wash when it comes to academia.  As a result people resort to things that are definable or binary.  SIRS is a perfect example of a clumsy attempt to define an intangible entity.  Many publications use positive blood cultures as evidence of sepsis.  The two things may sometimes go together but they are not at all the same.

All of that said, it is true that a large proportion of children later deemed to be septic have seen a primary care clinician in the 24 hrs before sepsis was recognised.  In many cases there is retrospective evidence that sepsis was present.  In many cases the child was probably not septic yet.  However, it is very difficult to remain constantly vigilant for a syndrome which is initially only subtlety different from all the non-sepsis.  Do we miss sepsis?  Of course we do, which is why we look for ways to improve the sensitivity of our assessment.

Logic dictates that sepsis left untreated is bad for you.  What is unknown is the potential harm caused by over-referral, over-investigation and over-treatment.  If we lower our threshold for treating presumed sepsis, how many children will come to harm for every child saved?  No-one has meaningfully looked at that.  Meanwhile, the only direction we seem to go in is towards caution, without a great deal of consideration for the possible dangers.

This is where it gets tricky.  Those who are trying to improve recognition of sepsis through the writing of guidelines have to give the reader something solid.  There is little point in a guideline telling someone that they should make a gestalt assessment.  There are also learning tools such as spotting the sick child.  Reading the guidelines and these websites will raise as many questions as give answers.  That is because recognising sepsis is just not that easy.

I now return to the original question, “How do you recognise sepsis?”  Mainly, I do three things.

Although guidelines may emphasise the importance of abnormal physiology, I think that experienced clinicians quite rightly give weight to the child’s activity and behaviour.  That doesn’t mean that the heart rate is unimportant, just not the only or most important thing.

What about blood tests?  Well, this is also in the journals quite often at the moment.  In children, white cells go up quickly in any infection, making that unreliable.  CRP lags behind the infection so that by the time this is raised the child is often already clinically unwell.  Inflammatory markers can not be relied upon to rule in or rule out sepsis.  With one or two rather orthopaedic exceptions, I simply do not use blood tests to help me recognise serious infection.  I make a clinical decision and take blood tests as baseline markers when intravenous antibiotics are given for presumed sepsis.

As clinicians, what we are good at is pattern recognition.  So, I am going to tell you what you already know.  Children with serious infections have a different pattern to their illness.  It looks a bit like this: 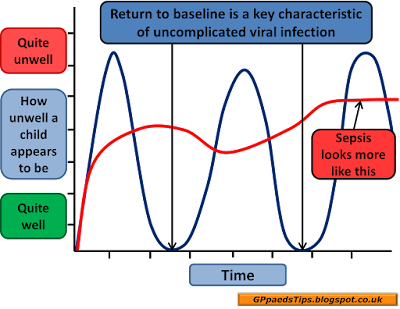 If a child is returning to baseline and doing things that reassure you, you can say that they are not septic.  That doesn’t mean that they cannot become septic of course.  That can happen to any child.  That is where good safety-netting comes in.

Acknowledgement - this post was originally requested by and published on the network locum blogsite.  Thank you for that.