Last month, the paediatric orthopaedic surgeons at Sheffield Children's Hospital sent out a call for the Primary Care community to ask them questions about common presentations. Unsurprisingly many of the questions were regarding things to do with growing legs.  Although there seems to be a guideline for everything, there is none for such problems.  While it would be possible to make such a guideline, referral pathways vary and guidelines do not always apply to every child.

It is a common concern: Are my child's legs normal?  Much of the time, children’s legs seem to be a 'funny shape'.  The vast majority of the time, these legs are normal.  This is the problem with paediatrics though: for everything that is normal or benign, there is an evil twin.  A relatively rare problem that is neither normal nor benign.  These complex problems usually have a considerable overlap with the simple ones and so can be difficult to spot.

To break with convention, we've put together some guidance which should apply across all the common presentations of growing legs.  That way, clinicians have a framework that allows them to make an assessment, rather than a rigid decision tool that tells people what to do and what not to do.  How refreshing!

The first thing to cover, is what is normal in growing legs.  As a general rule, things start to point out, then in and then straighten up as a child grows into their adult body.

Fig 1. From birth, children's knees will tend to go into varus and then valgus before becoming a normal adult shape.  Bandy legs (also called bow legs) are therefore expected in a child under the age of three and knock knees are considered normal until roughly 8 years old.  Genu valgum may persist into adolescence without any need for intervention.

The other simple rule of thumb is that normal legs are symmetrical, function normally and are not associated with any other abnormality.  This applies to pretty much every scenario - Genu valgum, genu varus, in-toeing, flat feet, hypermobility, "growing pains" and tiptoe walking. 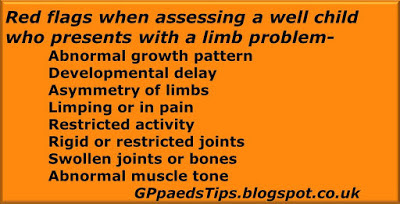 In general terms, the following presentations are normal unless there is reason to think otherwise (see red flags above):


The lovely thing about all of them is that the history and examination required is usually brief.  It is rare to need to refer or investigate.  What's wrong with  this child's legs?  Usually nothing, but more on that in the next GPpaedsTips post.

Many thanks to the paediatric orthopaedic team at Sheffield Children's Hospital for taking the time to answer questions and to turn their expertise into guidance.  At a time when Primary Care Guidelines are often written by Secondary Care clinicians, I find it most refreshing that someone is willing to give their time to share insights and provide general guidance which facilitates rather than dictates management in Primary Care.

Disclaimer:  All of the above is based on a standard number of legs.  For any variation on two legs, discuss with your local orthopaedic surgeon or possibly a vet.

Email ThisBlogThis!Share to TwitterShare to FacebookShare to Pinterest
Labels: Musculoskeletal

Paediatric Sepsis - the Facts, the Myths, How We Got Here and Where We Need to Go Next

You may be wondering if you're the only one confused about what's happening with paediatric sepsis.  You're not.  I work in paediatric emergency medicine and I just about get it.  Just.

I am frequently asked questions about what people (in both Primary and Secondary Care) should be doing now with regards to sepsis.  Everything seems to be changing so quickly that it is difficult to keep up.  As intelligent clinicians, we like to understand the reasons for change as well as what changes are occurring.  In the case of sepsis, research evidence is only part of the explanation for the changes that are happening.  That doesn't seem very reasonable but there are valid reasons.  As you're the one having to change your practice, it's probably time that you received a full and honest explanation for why you should do this in the absence of robust evidence.

Some things have changed in our understanding of sepsis, while other aspects remain frustratingly beyond comprehension.  What we know and what we don't know are key elements to understanding the evolving approach to paediatric sepsis. 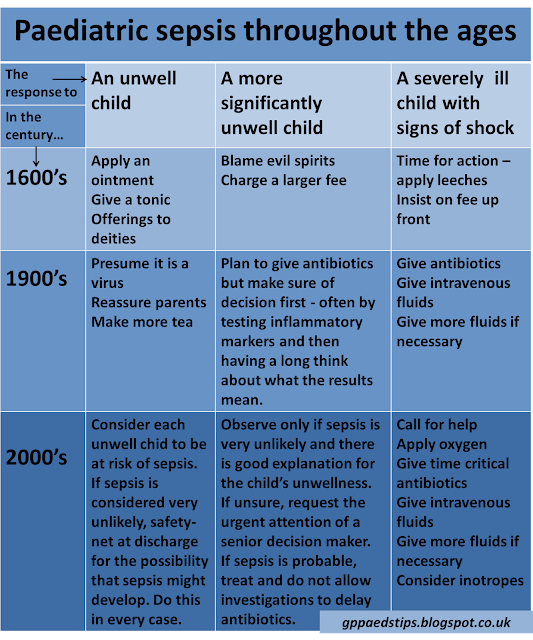 What we know:
That's about it for what we know.  It's a short list.

What we don't know:

Image taken from http://rolobotrambles.com/ with kind permission from Damian Roland.

It is therefore with a large number of uncertainties that we go forward.  There is no doubt that we are getting better at treating sepsis, but recognising it remains an area that we have a serious amount of work to do.

So why have we changed practice in the absence of evidence?  The answer is that, although we are all coming at the problem from a different point of view and with different agendas, we all want to do this better.  With the evidence pointing towards a benefit from early recognition and more aggressive treatment, changes are afoot to try to achieve these outcomes.  We need to alter our perspective and awareness of the problem of sepsis even if we do not yet have the answer to the question of how to better recognise it in children.

How should I change my practice?

Taking Damian Roland's sepsis spectrum and simplifying it, there are three clinical scenarios that I think are generally true by the end of consultation with an ill child.

For these children, we should no longer be talking in terms of them having 'just a virus.'  They have a virus and they have no signs of sepsis, however, they are now in a group that is at risk of developing sepsis.  Worse still, if sepsis should develop, the signs might not be recognised as they will be attributed to the viral illness.

What should now be standard practice is a safety-netting conversation at the close of the consultation which makes clear what the red flags are and when to seek further assessment or advice.  Parents should feel that they are empowered to seek this without fear of being seen as over anxious people.

Scenario 3 - the child who appears to be seriously unwell

If you work outside of a centre which has acute paediatrics, get them there.  If you are the person at the other end, make sure that the child is seen quickly, a decision is made to treat ASAP and that there is no delay to treatment with a full Sepsis 6 bundle as appropriate.  These children might have had multiple cannulation attempts over a long period of time in the past, but now it's time to get out that drill.

Scenario 2 - all the children in between 1 and 3

In between those two set pieces is where we make the big decisions and make them very carefully.  As mentioned above, there is no good decision tool available, no test and no easy answer.  Decision making in these circumstances is complicated (2) and the explanation of how these decisions are made cannot be oversimplified.

What can be simplified are the guiding principle for assessing these children who occupy the uncertain zone. 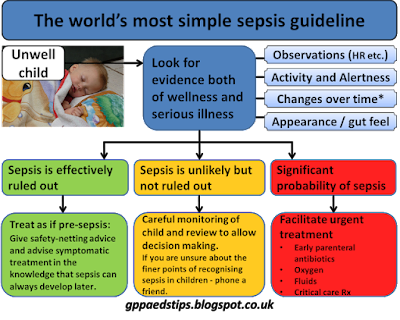 Early sepsis is difficult to detect, so we need to use every tool available to us to make sure that the diagnosis is made at the earliest possible opportunity.  Until we have something better, creating that opportunity means as many clinical assessments as needed depending on the scenario.

What has changed over the past few years?  Hopefully we have.  We now better recognise the importance of early recognition of and immediate treatment of sepsis.  What we shouldn't forget is that while we have set rules for ourselves that achieve the latter, we haven't yet found a way to consistently do the former.  So that leaves us with a need to do what we can to make the best clinical decision possible for each of our patients, while being patient with the academics who will hopefully one day come up with a magic test.

Disclaimer - very little research into the actual history of sepsis went into this article.  By little, I may mean none.  Still, the leeches bit is probably true.