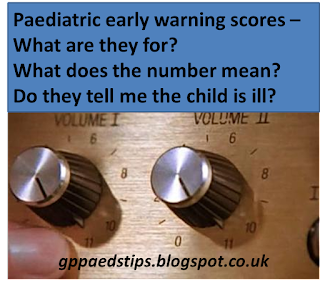 What is a Paediatric Early Warning Score and which is the best?

Paediatric early warning scores are ways of flagging patients up for further assessment and guiding the urgency of that assessment.

The original paediatric early warning score is called PEWS and exists in many forms.  It tends to be chart based and was designed for monitoring of inpatients.  The idea behind it was to take a traditional observation chart and give thresholds for concern and action to the numbers being measured.  The reason for doing this was an awareness that sometimes observations were recorded but that deterioration or severity of illness was not acted upon.

PEWS charts have colours to show how deranged the numbers are.  Anything not in the green is used either as a threshold in its own right (i.e. a red parameter for one physiological variable has a required action) or is part of a score (i.e. added to the values of other parameters) or both. 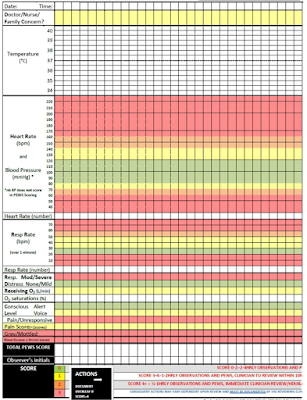 Because children have differing physiology* at different ages and because each clinical environment is different, it is essential to use a PEWS chart that is appropriate to the child and for the actions to be appropriate to the place where it is used.

Although PEWS was designed for ongoing inpatient monitoring, it has been used in other environments including primary care community settings such as out-of-hours care providers.
A relatively new kid on the block is the Paediatric Observation Priority (POPS) score.  This scoring system includes a score for nurse/clinician gut feeling and a somewhat subjective score for breathing, making it an interesting blend of measured parameters and clinical judgement. 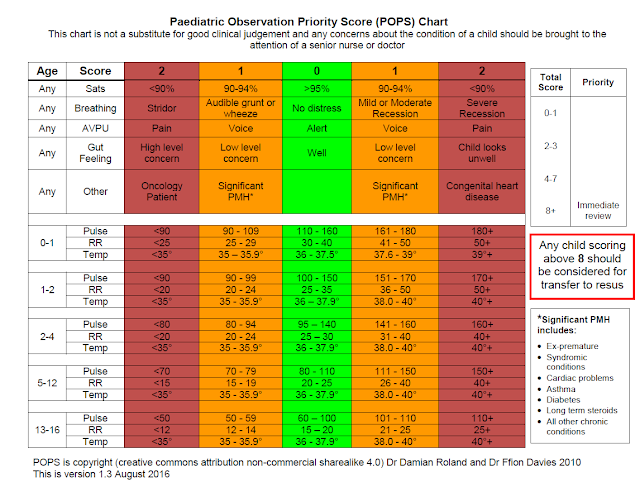 The other big difference with POPS is that it was designed for use in the front end of an Emergency Department.  Essentially, it was crafted to identify those patients who were more likely to need early senior decision making and early investigation or treatment.

Because it is not an ongoing observation chart, it can all cleverly fit on one page which has the numerical values* for each age.  For all of these reasons, POPS is increasingly used in community settings as a front door assessment tool.

*Note the careful avoidance of the word normal when referring to physiological parameters in children.  There is no normal, just numbers.

I wouldn't say that any one is better than another.  They have different usability and different emphasis.  What works best will vary by people and place of use.

Where a snapshot assessment is needed for high volumes of patients, I find that POPS works well.

What does the score mean?

The obtuse answer to that is, "A warning score in itself is not an answer."  The score was never designed to be an answer.  Instead it is part of a process that asks questions.  A score is simply a way of assigning a numerical value to a set number of variables.  It standardises a snapshot but in no way replaces appropriate clinical judgement.

The questions that are being asked are:
Of course these are questions that have always existed before scores were invented.  So if the score just asks the obvious questions, what is the point in them? 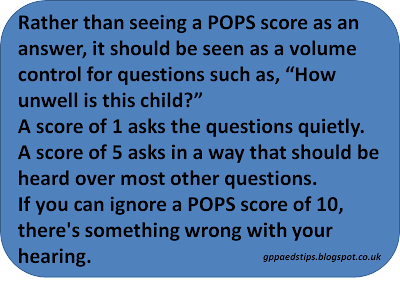 If the score is high but I am happy with the patient, does the score prove I am wrong?

No.  Let's prove that with an example.

Scenario 1 -
You go to see a child who has a POPS score of 5...
When you look at the breakdown of how they got  that score, they are a wheezy 3 year old with slight increased work of breathing (+1), a heart rate of 160 (+1), respiratory rate of 24 (+1), and Temp of 38 (+1). They were born prematurely at 32 weeks (+1) but have no ongoing complications of this.
When you go to see them, they run past you shouting, "I'm Spiderman!"
You complete your assessment and conclude that they have an uncomplicated viral URTI with a moderate viral wheeze.  It responds really well to salbutamol.
Four hour later they are tucked in bed at home with no respiratory distress.

Scenario 2 -
You go to see a child who has a POPS score of 5...
When you look at the breakdown of how this unwell 6 month old got  that score, they have a temperature of 37.9, heart rate is 176 (+1), a respiratory rate of 40 and they are grunting (+1).  They are subdued but if someone makes a noise the child produces a weak cry (+1).  They look seriously ill and the person completing the initial POPS score gave them 2 points for gut feel (+2).
Completing you assessment you decide that they are probably septic and act accordingly. Within 4 hours they are on a paediatric critical care unit, ventilated and on inotropes.  Two weeks later they leave hospital and make a full recovery.

The score indicated a need for an early and expert decision to be made.  In the case of scenario 1, the decision that the child was essentially well was entirely valid.  The score was valid also.

A score which is made up of these parameters cannot be wrong.  It is just a score.

Should I be using POPS scores in my clinical practice?

That depends on what you are using the score for.  If the score is to identify which of several children need to be put in front of a senior decision maker and how quickly that needs to happen, then that is a good use of a POPS score.  If the score is intended to identify a possible deterioration of a patient who is being monitored and observed, then this is what PEWS was designed for, though some will use POPS in that scenario.

Comment from Dr Damian Roland - Consultant in PEM at Leicester Royal Infirmary and one of the original developers of the POPS score:

Many thanks Edward - great piece and love the volume analogy! I use a very similar example of two different patients with the same score and what this means. It's an important example as children with higher scores (if admitted) have longer length of stay (based on the initial assessment POPS). A child with a score of 5 and above if admitted is likely to be in hospital for over 24 hours and also has a slightly higher risk of return if discharged (but the latter association actually quite weak). But lots of children with a POPS of 5 at presentation are safely and correctly discharged. So POPS helps highlight a patient who needs an intervention (which may be something as simple as senior review) but shouldn't tell you what to do.

I try to emphasise that the patients presenting to an Emergency Department are usually in a pre-treatment phase of their illness (they've not had medications) and therefore the range of possible acuities is very wide (which is why POPS is 0-16). This is different from an inpatient PEWS which is looking to identify children in a post treatment phase who are deteriorating. The bandwidth of PEWS (typically 0-7/8) is therefore smaller.

Finally POPS was designed to also help support decisions on 'wellness'. A POPS of 0 has a very high positive predictive value for being discharged without subsequent return and admission. It's the volume analogy in reverse. A POPS of 0 screams: why are you admitting me? And in some cases (DSH, Risk from specific past medical history, Social Concerns) you will do but it's the cognitive prompt that's the important thing.

Thanks Edward for shining a light on this important topic. I am happy to share copies of my paper explaining POPS "Scoring systems in paediatric emergency care: Panacea or paper exercise?" https://onlinelibrary.wiley.com/doi/abs/10.1111/jpc.13123 on request.
Posted by Edward Snelson at 05:30