If you can't decide between turkey and goose... Pertussiolitis and other animals - when a child has noisy breathing

Recently I learned a good way to find the answer to a question.  It happened like this-

On a walk in Sheffield I saw this strange bird: 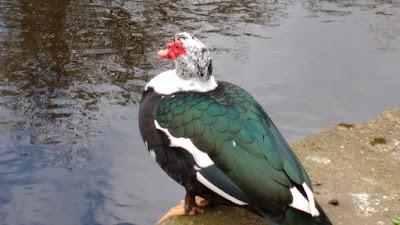 Unable to find this creature described in a ‘Birds of Britain’ book, I posted the picture to Facebook and commented that (to me) it looked like a cross between a turkey and a goose.  Most other Facebookers were similarly unfamiliar with the species but within a short period of time, I received a response from my niece who declared the bird to be a Muscovy duck.  After quickly confirming this to be true, I asked how she recognised this bird which is not native to the UK.  The response that came back was simply that she had searched the internet for "birds which look like a cross between a turkey and a goose".

I had the chance to complete this lesson, for myself in a clinical context, shortly afterwards when faced with another unfamiliar animal, this time in the form of a baby with an ambiguous presentation.  The child had developed a cough and feeding difficulties and had now become wheezy.  Preemptively, my diagnostic centres had skipped forward to the disease that I thought I merely needed to confirm: bronchiolitis.   This mental process was interrupted by a cough from the child, and what a cough it was.  It went on and on and on…  At the end of the period of coughing, the child’s face was properly red. The mother informed me that more often than not a spectacular vomit followed these paroxysms of cough.

With the new possibility of whooping cough suggesting itself, I examined the child with a new mission: confirm findings that are consistent with pertussis infection.  I was therefore, properly annoyed to find a wheeze which I felt was more in keeping with bronchiolitis.  Faced with this puzzle and remembering my niece’s methods, I asked the internet and found that, while not a typical feature of pertussis infection, wheeze has been well described in a large number of cases of children with whooping cough. (1)

This case reminded that, as primary care clinicians, we don’t really diagnose infections- we diagnose syndromes.  Bronchiolitis, for example, is not RSV infection.  Bronchiolitis is a syndrome of wheeze, poor feeding and cough which can lead to severe respiratory distress, apnoea and feeding or respiratory failure.  RSV is one possible cause amongst many untreatable viruses.

Similarly, despite what I was once taught, croup is not caused by parainfluenza virus.  Any virus can cause the upper airway swelling that leads to barking cough, possibly stridor and varying degrees of respiratory distress.

Just to keep me on my toes, children seen to present from time to time with features of multiple syndromes.  The most common bedfellows are croup and viral induced wheeze.  When faced with a child who has a barking cough and a wheeze, one initially questions whether the noise is in fact a stridor (and rightly so).  If it is a wheeze, then it is a wheeze.  If the child has both croup and viral induced wheeze, ther is no point trying to limit the diagnosis.  Just get on and treat both.  It occasionally causes a bit of confusion if the child needs admission.  I think that some junior doctors take the referral of a child with the diagnosis of viral wheeze and croup together to be a sign of uncertainty, or perhaps dementia.

I would suggest that perhaps wheeze is not a feature of whooping cough but that it is possible for a baby to have bronchiolitis at the same time as whooping cough, both caused by pertussis infection.  It doesn't really matter though, since the cause of the infection is only of interest if it can be treated, or transmission prevented.

There are so many infectious causes of noisy breathing in children. Here is a simple guide to what’s what and what to do about it: 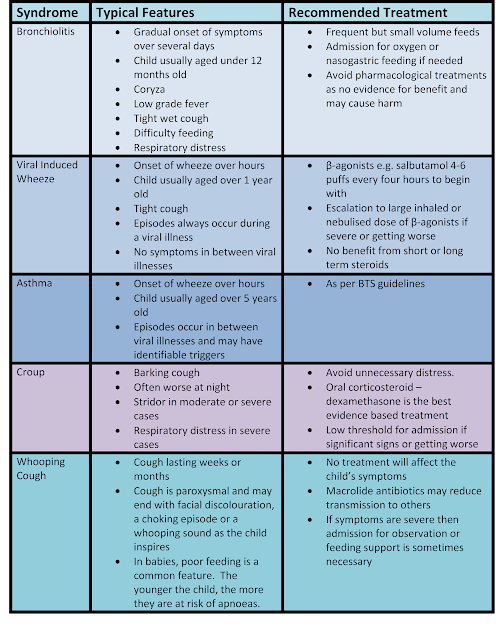 Many thanks to my niece for teaching me what the internet is for.

Disclaimer: I take full credit for inventing the use of evidence based medicine in the consulting room.

Acknowledgement: This is a slightly different version of a post which I wrote for the Network Locum Blog earlier this year.

Paediatrics is absolutely full of made up numbers - we rely on them every day.  If you think about it, many of the numbers that we have been given to work with are too conveniently rounded to be believable.  I don’t want to spoil the movie for you, but you have been lied to an awful lot.

The question is then. what do we do with the made up numbers?  Knowing where they come from is the key to the answer to that question.

This one goes way back.  It actually comes from a number of fluid ounces per pound per feed which was a rough guide produced back in the bad old days.  The thing is that no-one has ever done a robust study finding out how much the average breast fed baby takes in 24hrs because there has been no good way of checking.  Not only is the number 150 a bit conveniently round and decimal, no one can tell you what the 5th and 95th centiles are. These facts would be essential for you know if a baby is taking an abnormal amount of feed.  The reality is that the mean (which this may or may not be) is not what we need to know in the first place if we are trying to assess whether feeds are too much or two little.

Luckily, you don’t need to know.  The best way to tell if the feed is enough is by the effect it has on the baby.  If it is too little, the baby won’t grow.  If it is too much the baby might exhibit signs of reflux disease due to overfeeding.

This brings us back to the question of what to do with a made up number.

Just because a number has never been validated by research doesn’t mean it’s not at all valid.  This particular number has been in use for decades now and is a useful landmark even if we don’t know which side of the truth it sits on.  The fact that it is accepted practice tells you that it has value - if it was frankly misleading, someone would have noticed.  The 150ml/kg/day number does at least tell us whether a child might be having too much or too little feed.  Knowing that you’re nowhere close to that figure is also useful.  For example, if a baby has faltering growth and is found to be taking 50ml/kg/day of milk, then lack calories would be a reasonable diagnosis.

For many years there have been three main lists of ‘normal values’ for physiological values in children.  We rely heavily on these as warning signs when it comes to recognising ill children.  Those reference ranges were all different for a reason – they were decided upon by experts rather than being based on definitive evidence.

Two published papers (1,2) have shown that the numbers in pooled population data conflict in places with the normal values in these reference ranges.  Notably however, the authors of these papers acknowledge that (I paraphrase) there is no such thing as a normal value when it comes to heart rate or other parameters in children.  There are just too many variables each of which can have a huge effect: sleep, activity, fear, pain, fever...  You get the idea.  Do we need to have normal values for a three year old who has just eaten an ice cream but is upset because a sibling has taken a toy off them?  I would love to have an app that takes into account variables like tiredness and temperature.  In the meantime, what I have is a lot of numbers that give me some idea of what normal might be, if only there was such a thing as normal in a child.

In many ways, the studies referenced show that consensus or expert opinion can be pretty good at coming up with the answers.  The correlation between the study findings and the made up numbers is remarkable.

I find it liberating to know that a heart rate can’t be treated as a piece of information out of context.  After all, we should always be looking at the child.  If their numbers are lying to you, hopefully their smile will tell you the truth.

By now, you should be able to spot these numbers for what they are:

The lies go on and on.  I couldn’t even begin to list the drug doses that are either plucked out of nowhere or at best based on some research where a number plucked from nowhere was shown to work.  Adrenaline for cardiac arrest is in the former group amazingly.  Fortunately for most drugs, we are protected by a wide therapeutic margin of error.

I like numbers.  Unfortunately children are themselves hugely variable and rarely normal.  I certainly wasn’t.

Disclaimer - If you can't trust numbers, what can you trust?  Certainly not me.