Too much choice - What milk do you need to give a baby with a feeding problem?

To paraphrase one of my favourite comedians (John Finnemore) - Once upon a time there was too little choice.  Then around 1980, there was just the right amount of choice.  Now, there is way too much choice.  In paediatrics, this is perhaps more true for special milks than any other treatment decision we make.

Have you been to a supermarket recently to buy some milk?  Just trying to find what you want when you know what you want can be overwhelming.  Should it be 0% fat?  1%? 2%? Organic? Cow's milk? Goat's milk? Filtered? I could go on but you get the idea.  There is just too much choice. 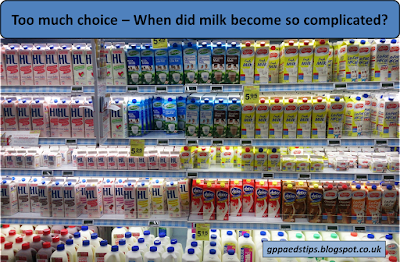 The same is true when trying to decide which milk to use* for a baby with a feeding problem.  There are so many possibilities that it can be quite confusing.  Don't worry though - all the choice is an illusion.  There are only a few real differences which can easily be explained.  The best way is probably by going through the problems rather than the milks.  So here we go.

*Note that this only applies to choice of formula in formula fed infants.  While breastfed babies less commonly develop problems such as milk allergy, the solution is not to change them to a formula feed.  It should be possible to continue breatfeeding no matter what the problem is.

What is it?  Nobody knows. No cause has been found to really explain why some children cry a lot of the first few months of life.

Which special milk helps this condition?  There is no good medical evidence from RCTs published in peer reviewed journals that I know of to support the use of any special milk.  The keystones of managing colic are to rule out other pathology and to give a good explanation of the condition to the parents.  Ultimately, the only thing that really works to resolve colic is the passage of time.

What is it?  It is normal for babies to reflux/ regurgitate milk.  GORD is the term used to label reflux associated with significant symptoms such as marked and persistent distress.  The amount of milk that the infant brings back is not what separates GORD from physiological reflux.  If a baby has several large regurgitations a day but is minimally affected, this is not considered to be a disease. (1)

The first thing to do is to make sure that the infant is not overfeeding.  This is a surprisingly common scenario that is reasonably simple to manage. 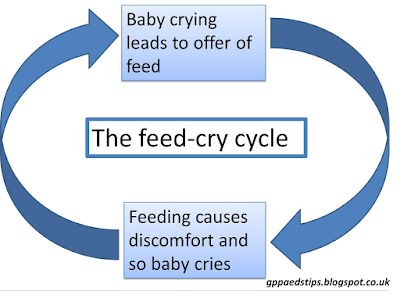 Which special milk helps GORD? Most infants with GORD are symptomatic due to reflux of milk, rather than having a problem with acid reflux.  This is almost certainly why the evidence for routine use of acid suppression treatment (PPIs and H2 blockers) suggests little or no effect.

For infant GORD without red flags the mainstay of treatment is to avoid over-feeding, and to use a thickener in a standard feed.  Alginate preparations should be used as second line treatment since they have a high risk of causing constipation.  There are reflux milks on the market which are essentially standard milks with thickener already blended in.  These are not usually prescribed.

What is it?  Inadequate production of the enzyme lactase in the bowel means that lactose (the sugar in milk) is left undigested.  Bacteria then ferment this sugar and produce noxious chemicals which inflame the bowel, further diminishing the ability to produce lactase. 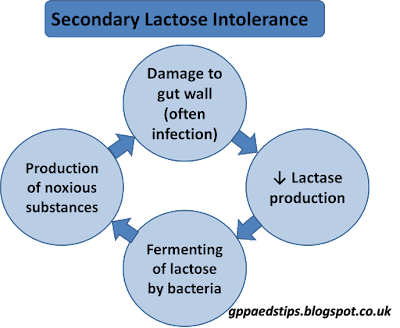 Possible reasons for the overdiagnosis of lactose intolerance include:
Which special milk helps this condition?  If an infant genuinely has lactose intolerance then a lactose free milk will result in a dramatic resolution of symptoms, usually within days.  There are numerous lactose free formulas which are commercially available.  Soy milk is also lactose free but is not recommended for infant boys as the effect of phytoestrogens is unknown.

Lactose free milk does have the potential to cause more dental caries than standard milk, so there is good reason to avoid the overdiagnosis of lactose intolerance.

What is it?  Well, confusingly, there are two types of CMPA.  IgE type CMPA is what you might call a classic allergy.  With this immediate type of response to cow's milk protein, typical symptoms include wheeze, urticaria, swelling etc.  Usually, it is quite obvious that the child is having an allergic reaction, leaving the main question to be what the allergen was.

In most cases, infants usually have a non-IgE CMPA.  This is sometimes referred to as milk intolerance, which causes it to get confused with lactose intolerance.  I prefer to avoid that term to avoid this misunderstanding.  Non-IgE CMPA is predominantly an enteritis, without systemic features.  As such the symptoms are vague and difficult to distinguish from other conditions such as GORD and colic.

Clues that an infant may have non-IgE CMPA include
Which special milk helps this condition?  The best way to stop an an allergic reaction is to remove the allergen.  In order to reduce the allergenicity of the formula, CMPA milks have the proteins broken down to varying degrees.  While there are partially hydrolysed feeds available, an extensively hydrolysed feed (EHF) is recommended for a child with CMPA.  There are many EHFs available.

One pitfall in the prescribing of milks to children with CMPA is to confuse lactose free milk with EHF.  Another is to accidentally prescribe an amino acid formula, because these are also licenced for use in CMPA.  Amino acid formulas are only used for extreme cases of CMPA.  These feeds are quite unpleasant and rather expensive, so EHFs should be first line unless there is a specific reason to chose an amino acid feed. 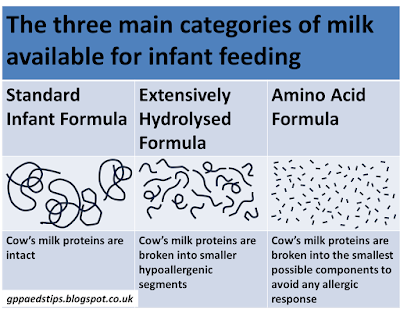 Amino acid feeds (AAFs) are generally reserved for use in secondary care.  This type of milk is the ultimate in hypoallergenicity (real word?) but is also very expensive and rather unpleasant to taste.  AAFs are usually resorted to rather than being chosen first line.  Indications include severe IgE type allergy or non-IgE allergy that does not respond to an ECF.

One alternative to use first line is soy milk.  This may or may not be successful as a treatment strategy.  The problem with soy milk is that although it does not contain cow's milk protein, it is not in itself hypoallergenic.  Many infants who have reacted to cow's milk also react to soy milk so you end up no further forward when that happens.  There is some caution regarding the phyto-oestrogens that are found in soy milk.  Although it is an unproven risk, the concern is that these chemicals may have an effect on infants and so it is sometimes recommended that soy milk is not given to boys under the age of six months old.

Parents may also want to try other mammalian milks (e.g goat).  Most dietitians recommend that these are avoided due to the poor nutritional content.  Again, these milks are not hypoallergenic and there is significant risk of further reaction. 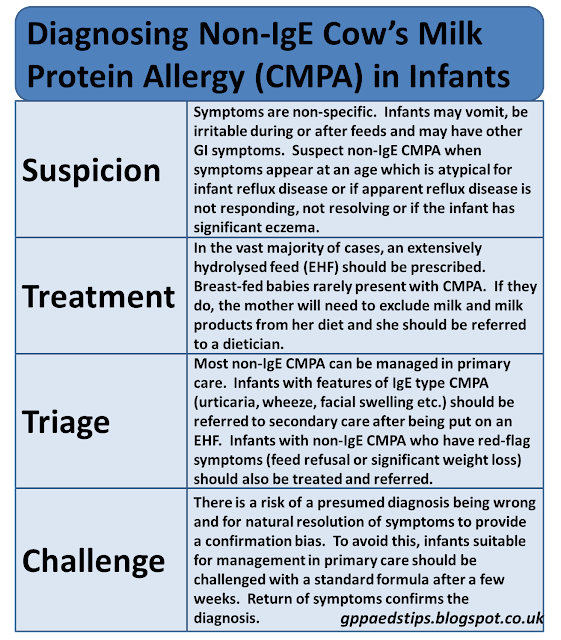 When introducing an ECF, it is worth considering that the infant may object to the taste of the new milk.  Although nowhere near as unpalatable as an AAF, ECFs do have a distinctive taste difference from standard feeds.  A sudden switch can cause problems at feeding times.  One strategy to avoid this is to blend the new milk in over a few days.  If the infant is on a 6oz feed, use 5oz of standard feed mixed with 1oz of ECF on the first day.  On the second day, increase that to 2oz of ECF and 4oz of standard feed.  After a few days, the infant should be fully established on the new ECF feed.

The best way to avoid the problem of too much choice is to simplify things.  Find out a locally available ECF or check your local guideline/ formulary.  That way you only need to know one milk- choice doesn't get more simple than that.

Edward is fundraising for the development of the Sheffield Children's Hospital Emergency Department.  If you found this post useful and would like to support that cause, this link will take you to the donations page.  GPpaedsTips is free to all and produced without expectation of any such donation, but if you don't ask...

Should you give ibuprofen to a child on an empty stomach?

In the previous post, I gave some general principles about prescribing for children.  One person took the time to get in touch about the issue of ibuprofen on an empty stomach.  This is an interesting controversy and is an issue well worth understanding.

Ibuprofen is a useful medication when it comes to symptom control in the unwell child.  Studies on the benefits of ibuprofen when co-administered with paracetamol (acetaminofen) have tended to show that there is no additional benefit when it comes to controlling fever.  However, pyrexia is no longer generally thought to be the enemy and there is no clear indication to normalise an unwell child's temperature.  That doesn't mean that the child will not benefit from analgesia.  One of the issues with children who have upper respiratory tract infection (URTI) is that they are often reluctant to drink, either due to a general feeling of being unwell or due to the pain associated with trying to drink.  If paracetamol and ibuprofen have a clear role in managing the unwell child it is this: making the child feel comfortable and well is an important part of giving them the best possible chance to have good oral intake.  If fever is not the enemy then dehydration certainly is.  If an unwell child is refusing fluids and a combination of paracetamol and ibuprofen resolves that, why wouldn't you?

One of the anxieties that this situation causes is the fear that these are the very children at risk of the complications of ibuprofen.  Ibuprofen, being a non-steroidal anti-inflammatory drug (NSAID) is associated with renal impairment and gastrointestinal (GI) bleeding.  Should it then be avoided in children with poor oral intake?

First, let's look at the renal issue.  The short answer is that while renal impairment is a risk in dehydrated children (1), it is safe in children who are not dehydrated (2), even if at risk of dehydration.  If ibuprofen can potentially aid oral hydration, it seems safe to use, providing the child is not already showing signs of dehydration.  It is also worth noting that in the study reporting acute kidney injury (AKI) in children taking ibuprofen, all made a full recovery.

The way that ibuprofen risks GI complications is a systemic effect.  It reduces prostaglandin production, thereby reducing the natural protection of the gastric mucosa.  Although we are often told that ibuprofen should be taken with food to reduce GI side effects, there is a debate about whether this should be the case at all.

Advising that analgesia should be given with or after food delays the effect (5) of the pain-killers without clear benefit in terms of gastric protection.  It is unclear as to whether taking ibuprofen with food reduces side effects such as nausea but it shouldn't have an effect on the risk of GI bleeding. As one publication puts it: "Apart from providing unsubstantiated ‘safety’ information by advocating food intake with NSAIDs it may be more appropriate to advocate OTC NSAIDs be taken on a fasting stomach in order to achieve a rapid onset of action and hence avoid an ‘extra’ dose of the drug because the rapidity of pain relief did not meet the patient's expectations." (6) 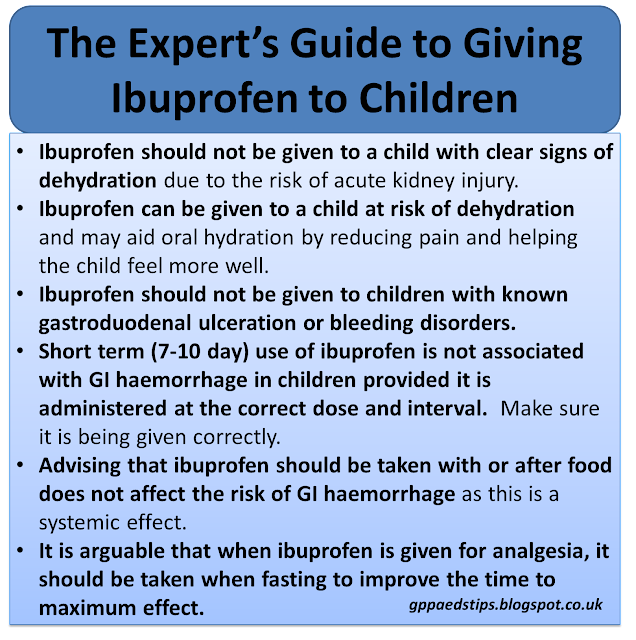 The bottom line is that as long as a sensible clinical assessment has taken place, ibuprofen can be given to a child who has not eaten.  It may even be best practice.