Kids get hit in the head a lot

A few weeks ago, I wrote about some general principles for assessing minor injuries in children.  I promised to follow this up with posts about specific injuries and instead wrote about some other nonsense.  But then I do get hit in the head a lot.

Head injury is the most common type of minor trauma presentation in children.  This is not just because they bump their heads easily.  It is also because there is a fear that there will be more significant consequences from that injury.  Because the head contains the brain, there is a concern that there may be some internal damage that cannot be seen.  This anxiety is obvious in the parents but is also often there in the clinician.  We therefore need to know when to worry and when not to, otherwise too many children have unnecessary time spent in emergency departments or worse still, have unnecessary investigations.  The good news is that anxiety is often unnecessary.

Thanks to much research on the subject, there is a lot known about what is likely to indicate a significant head injury.  As a result, those working on the front line have good evidence to back up a clinical, common sense approach to assessing children following a head injury.

Firstly, let me remind clinicians of the ‘special patient’ rule, since that is either absent or poorly emphasised in most guidelines.

For the rest, there are two main questions to be asked:

The ‘what happened?’ question is about two things.  Firstly, what was the mechanism?  The amount of force delivered and the way that it was delivered are both important.  If a child falls 8m and lands on a snow drift, they might be OK.  If they fall out of a ground floor window onto a hard surface they will still probably be OK.  If they fall 5m out of a window head first onto a rock, then they have a good chance of a skull fracture.  Mechanism is especially useful in children who are more difficult to assess such as neonates.  A study published last year (2) found that "Infants, dropped from a carer's arms, those who fell from infant products, a window, wall or from an attic had the greatest chance of ICI (intracranial injury) or skull fracture."

The second part of ‘what happened?’ is the effect on the child.  The absence of red flags occurring immediately after the injury is very reassuring.

This is where things can become a little tricky.  History and examination of children following head injuries can be full of vague and uncertain information.  That is not a problem.  First of all find out what you can be sure of, and then decide about what to do with the rest.  Often, the certainties make the uncertainties irrelevant.

Note that it is not necessary to assume the worst.  Many injuries are not directly witnessed.  Even when they are, the information may be confused or unreliable.  That is fine.  I think that it all depends on how the child is when they present.  If they are back to normal, it is safe to take the approach of only counting definite loss of consciousness as having occurred.  Being briefly unrousable is probably too vague.  Similarly, if the child is confused or lethargic at presentation, there is no need to deliberate about whether there was or wasn’t enough vomiting to be called persistent.  The child’s condition now over-rules that speculation. 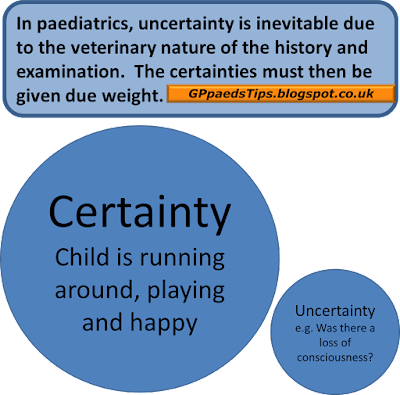 That brings us onto how the child is when they present for assessment.  This is the most important filter.  In most cases, a child will declare themselves fully fit.  A child who is back to being their normal self and shows interest in normal activities is telling you that their highest brain functions are normal.  You should take that as the gift that it is. 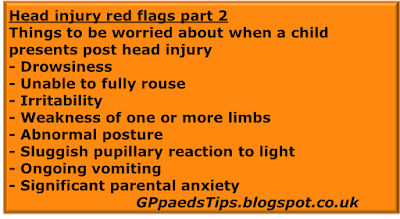 Again, there may be some uncertainties.  It is always difficult if the child is now tired or grumpy to be sure that they are back to normal.  If the mechanism was benign and there were no ‘at the time’ red flags, it is often possible to avoid over-caution even in these circumstances.  However, if there is uncertainty about a loss of consciousness and about how alert the child is, caution is probably wise.

But what about the lump?  This is the subject of one of the great paediatric myths.  Parents are always worried that a lump is a bad sign.  Of course in a baby, it is.  A growing skull has enough give so that soft tissue swellings are rare.  There just isn’t usually much energy transmitted to the soft tissue.

When a baby gets a swelling on their head after an injury this is often a haematoma.  The presumption is that this has been caused by skull fracture and the subsequent bleeding.  For this reason, a ‘boggy’ (squishy) swelling on a baby’s skull is a skull fracture until proven otherwise.  They may not even appear unwell since their open sutures allow the brain to avoid any pressure effects (initially).

In an older child, a swelling in a well child is not the same deal at all.  If a 12 year old gets a swelling on their head after a knock, but are otherwise well, they almost certainly have a soft tissue swelling.  It takes a lot of force to fracture the skull of a 12 year old and such injuries should flag themselves up in some other way than simply as a lump.

The NICE guidelines for head injury published in 2014 (2) made this distinction by specifying that it is the under one year old group for whom lumps on heads are a concern.

So, there are often uncertainties but these should rarely get in the way.  Children will present to many health care setting with head injuries and if they declare themselves well, it should not matter too much who or where you are.  What matters is that you have the skills to assess a child and evaluate what you see and hear.  If you hear and see nothing bad, then it really is as simple as that.  But don’t take my word for it.  I get hit in the head a lot.

Disclaimer: If you’re uncertain about your uncertainties, it is probably best to send them my way so that I can be uncertain for you.  After all, that is my job.