There are a couple of childhood phenomena that every clinician should know about.  These events are terrifying to parents yet they are safe and not harmful.  When children have a reflex anoxic seizure or a breath holding episode, it will sound alarming to the clinician to whom the child presents.  The extreme nature of the event might suggest a diagnosis of epilepsy or head injury.  It is possible to distinguish these phenomena from their better known counterparts.  The best bit about diagnosing reflex anoxic seizures and breath holding episodes is that no tests are needed – it’s all about the sequence.

Gina is an 18 month old toddler who has always been fit and well apart from the usual respiratory tract infections that go with the territory of being a young child.  Gina was born by normal delivery, following a healthy pregnancy and was well at birth.

Gina’s parents have attended following an event which occurred this morning.  Gina was playing when her older sister took away her toy.  Gina cried for a minute while her mother negotiated with the older sister to resolve the situation.  Gina’s mother then noticed that Gina’s crying sounded quieter and looked to see that Gina was turning a deep purple colour.  There were no objects that Gina could be choking on.  As her mother went to pick her up, Gina stopped breathing altogether and then went floppy.  While still unresponsive, Gina then started breathing and slowly her colour returned to normal.  As she improved in colour, she became responsive.  Within minutes she seemed completely normal.  Her parents have brought her to find out what happened.

Gina is now looking very cheerful and is exploring the room you are in.  She has a normal cardiorespiratory examination.  Her neurological examination is normal for her age.

What did happen to Gina?

Gina has had a breath-holding attack.  This is a phenomenon in which disordered breathing leads to prolonged expiration and a temporary failure to inhale.  Sometimes these events simply result in a blue episode and then self-resolve.  In some cases, the child may actually stop breathing and collapse.  When this occurs, the normal respiratory drive re-sets and the child recovers as a result.

Tina is a 2 year old child who is usually fit and well.  Tina has been brought by her parent following an event that has just happened this morning.

Tina was running around and having a lot of fun in her house this morning. She then banged her head on a door handle.  Her mother was there when it happened and there says that Tina started crying immediately.  After just a few seconds of crying Tina, suddenly went pale and collapsed to the floor.  She looked as though she was dead for a few seconds and then she went stiff.  After that she had a few jerking movements and then stopped.  Her colour then improved and she started to make some normal movements.  Tina then slowly returned to being her normal self over about 30 minutes.

When you examine Tina, she is back to normal and trying to climb onto the chair.  She is laughing and interactive.  She has a normal cardiorespiratory examination.  Her neurological examination is normal for her age.

What happened to Tina?

Tina has had a reflex anoxic seizure.  This is another phenomenon seen almost exclusively in young children.  A noxious stimulation (pain or surprise or emotional upset) causes an extreme vagal response.  This leads to hypotension and bradycardia.  Circulation is briefly arrested causing a collapse and the alarming change of colour.  In some cases the episode resolves from this point.  In some cases the sudden loss of cerebral perfusion leads to a seizure, which is usually brief.
Whether a seizure occurs or not, the child will reset and recover.  It is likely that the collapse itself stops the vagal overstimulation.

Breath-holding attacks and reflex anoxic seizures have many features in common with each other.  Both occur in young children.  Both cause colour change, collapse and self-resolve.  Both phenomena are terrifying for a parent to witness. 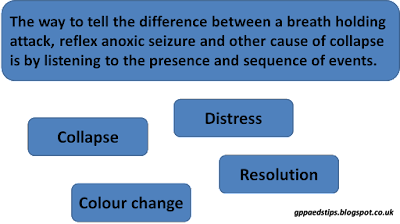 The way to tell the difference between a breath holding attack, reflex anoxic seizure and other cause of collapse is by listening to the sequence of events. 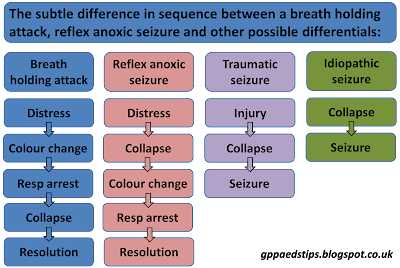 If the diagnosis is clear and the examination is normal, there is no need for investigation or follow-up.  Some clinicians will do an ECG but if there is genuine suspicion about an underlying arrythmia, a resting 12 lead ECG is not an adequate test.  If there are suspicious features in the history or examination, a 12 lead ECG should be a stepping stone to further investigations such as a 24 monitor.

In most cases the diagnosis is apparent and the examination is normal.

Disclaimer - If you get a Fibonacci sequence, that's worth a case report.