Uncomplicated febrile convulsions in children - where and who to diagnose?

This is the first in a series of posts that explore the clinical scenarios that can be managed entirely in a pre-hospital setting but are often or sometimes sent for further assessment.  In each case, I know that some primary care clinicians do fully manage these problems without involving secondary care.  The aim of these posts is to explore the possibility that the condition can be managed without secondary care.

A two year old has been managed symptomatically by their parents for what seems to them to be a viral illness.  The child developed a fever this morning which led the parents to give paracetamol.  Shortly afterwards, the child became stiff and then had rhythmic jerking of all four limbs.  This continued for less than a minute.  During the seizure the child was completely unresponsive and went slightly blue.  Their eyes were fixed and staring.

The jerking movements ceased spontaneously and the child was then sleepy for a few minutes, followed by some crying.

In less than an hour, the child is back to their normal self.  They are alert, settled, interactive and mobilising.

If they manage to get to see a primary care clinician, should they be referred to secondary care for further assessment?

While in the majority of such cases parents will present to secondary care, first febrile convulsions can present to General Practice or be seen initially by a paramedic advanced clinical practitioner.  To explore the value of ensuring a secondary care assessment, we need to look at the answers to a few other questions.

What is a febrile convulsion (seizure)?

A febrile convulsion is like an epileptic seizure in every way other than that it is symptomatic of an illness rather than being due to underlying idiopathic epilepsy.  Anyone who doesn't have epilepsy can have a symptomatic seizure (e.g. due to head injury or hypoglycaemia).  Epilepsy is different - the tendency to have seizures without a specific cause.


A febrile convulsion can be atypical, prolonged or focal in which case the possibility of significant pathology is increased and those children should be seen urgently in secondary care.

What causes a febrile convulsion?

This is why the return to baseline (i.e. as well as can be expected for an uncomplicated viral illness) is arguably the most important part of the diagnosis.  If, post seizure the child fails to demonstrate their wellness and neurological normality, the seizure may be symptomatic of CNS infection or other abnormality. An atypical, prolonged or focal seizure also changes the index of suspicion greatly.

What tests are needed following a febrile convulsion?

If the diagnosis of febrile convulsion is as above and was a self-limiting generalised tonic-clonic seizure, no tests are required.

So what happens when a child is seen in secondary care following an uncomplicated febrile convulsion?

The history and examination is repeated.  Unless there are specific indications for further tests (clinical suspicion of CNS infection or abnormality) everything else is unnecessary.

Essentially the endpoint in straightforward cases is a history and examination which leads to a diagnosis of febrile convulsion.  So, if the diagnosis is already made, making it again adds absolutely nothing. 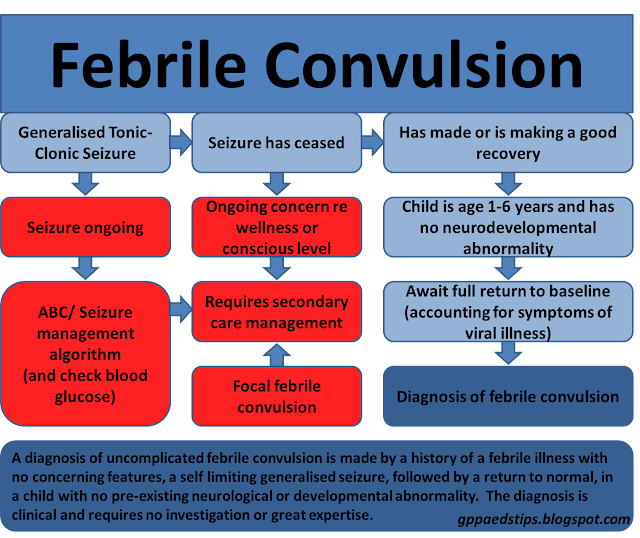 Who makes the diagnosis, when and where is more about timing, availability and clinical knowledge/ ability.  If you're the right clinician in the right place at the right time, congratulations.  It's you.