COVID question number 6 - What is hyperinflammatory syndrome and how do I recognise it?

At the same time that we are seeing increasing evidence that COVID-19 is less common, less severe and less infectious in children (1), evidence is emerging of a new phenomenon that seems to be related to COVID-19 infection in children: hyperinflammatory syndrome (2).

In a time when people are being encouraged to self-manage febrile illness at home, and primary care has moved to do more remote assessments, the emergence of such a serious clinical entity is worrying.  Although the number of cases remains relatively small, it represents a significant number of seriously unwell children.  Considering how much we focus on the recognition of sepsis in children, current cases of hyperinflammatory syndrome are being reported in numbers comparable to and possibly greater than numbers of children with severe sepsis.

Like sepsis, we need to be aware of hyperinflammatory syndrome and recognise it where it is manifest, rather than over-diagnose it to the detriment of children with uncomplicated viral illnesses.  So how do we get that balance right?  The answer lies in recognising what is unusual about the illness rather than focusing on the most common features, since these are not necessarily good discriminators.

First, a few FAQs about hyperinflammatory syndrome in children:

What is hyperinflammatory syndrome?
Like sepsis, definitions of hyperinflammation vary and reflect the fact that it is a clinical diagnosis without a binary test or decision tool.  The published literature reflects an uncertainty about pathophysiology but describes a significant number of cases (20 in North London in less than a month) of children with a similar clinical presentation.  The features have been described as most similar to Kawasaki Disease Shock Syndrome (3), a thing so rare that most of us had never heard of it before this recent surge of cases.

Is it caused by COVID-19 infection?
When the initial reports of cases were being circulated without details, it was unclear as to whether this was simply a case of something happening during the COVID-19 pandemic or because of it.  While no official source has yet declared that COVID-19 is definitely the cause, there is plenty of evidence that this is the case.  First, the numbers are highly unusual (4) and there is a pandemic at the moment.  Secondly, many of the children have tested positive for SARS-CoV-2/COVID-19.  While a small proportion testing positive could be explained by the background rate of COVID-19 in the community, the positive test rate in these cases seems too high.  At the moment the sample size is too small to be conclusisve.  Finally, the demographic of affected children mirrors that of severe COVID-19 in adults, with a predilection for males and BAME children.  It therefore seems most likely that these cases are related to the COVID-19 pandemic.

The hyperinflammation syndrome that is being reposted is thought to be a post-infection phenomenon, rather than a complication of acute infection.  The exact mechanism for this is unclear.  Clinically, it has features similar to Kawasaki Disease (for which the mechanism is unknown) and some overlap with toxic shock syndrome (which is seen in bacterial infection) so we're on the back foot when it comes to working out pathophysiology.

How do I recognise hyperinflammation in a febrile child?
The reported features of the children presenting with hyperinflammation are a mixture of non-specific signs and symptoms with a few more unusual elements that may help the front-line clinician.
While gastroenterological symptoms were common, I would suggest that this information is of little help to a clinician who sees acutely unwell children.  Diarrhoea, abdominal pain and painful swallowing were all common features in children who later developed hyperinflammation but are also frequently found in other viral illnesses.

In the case series reported in the Lancet, tachycardia was sometimes present and sometimes heart rate was unremarkable.  This is somewhat surprising since this hyperinflammatory syndrome seems to affect the cardiovascular system most severely.  It is also consistent with other serious paediatric presentations, where heart rate is one of the least specific clinical signs, being both falsely concerning and falsely reassuring on many occasions.

Tachypnoea, also a common feature occurring when the child presented with hyperinflammation is a more specific feature.  Uncomplicated viral illnesses in children do not tend to affect breathing other than in the form of a transient tachypnoea while febrile.  Unexplained, consistently fast breathing should therefore be considered clinically significant.  This was reflected in the Lancet case series, the majority of whom had tachypnoea.  Note that the cases reported did not tend to have pneumonia, thus the qualifier of "unexplained".  Other explanations for fever and abnormal breathing remain more likely.

The other feature that was most consistent and helpful in discriminating from uncomplicated viral illness was an unrelenting fever.  In children with an uncomplicated viral illness, pyrexia can be dramatic and associated with alarming features such as shivering, cold peripheries, blue lips and mottled skin.  Typically, this is followed by a dramatic improvement, often with the aid of antipyretic medication.

In the cases reported with suspected hyperinflammation secondary to COVID-19 infection, the fever was noted to have been persistently high (38-40 C/ 100.4-104 F) which is much less commonly seen in uncomplicated viral illness.  This may therefore be one of the more useful ways of telling the two apart. 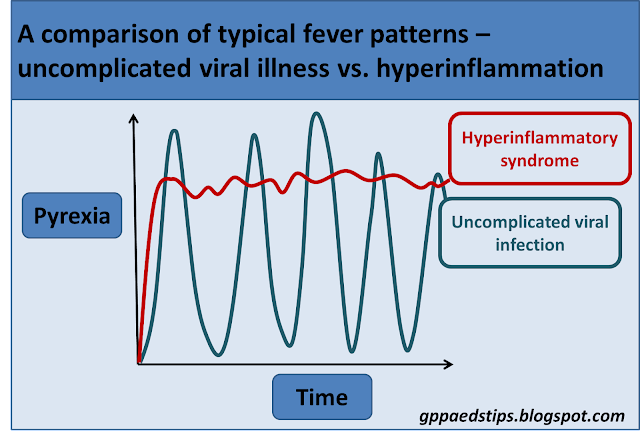 Other features reported include a "variable rash" and painful extremities.  Rashes and pains are common features of uncomplicated viral infection but in combination with the more specific features may help clinicians recognise the syndrome early. 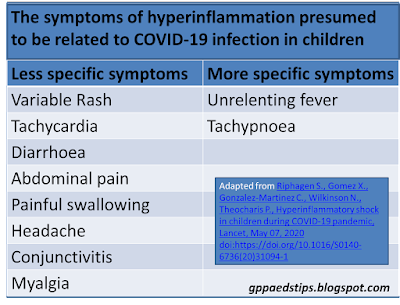 Recognising hyperinflammation (presumed to be related to COVID-19 infection in children) early may therefore be a case of recognising the unusual, looking for alternative explanations such as pneumonia and if no other pathology explains how unwell the child is, looking at how many of the less specific symptoms are present.  If that sounds familiar, that's because it is a similar approach to recognising Kawasaki disease.

The disease then tends to progress to a phase with more significant cardiac involvement, with a profound effect on circulation in many cases.  Shock refractory to fluid boluses is a commonly reported feature.

If signs of shock develop, this will make it more straightforward to recognise that the child does not have an uncomplicated viral illness.  Distinguishing hyperinflammatory shock syndrome from sepsis and other similar presentations brings its own challenges for emergency medicine and acute paediatrics.