Adolescent mental health is an area of practice where we need to take opportunities when they present themselves. This post is about something that has been a huge game changer for me. 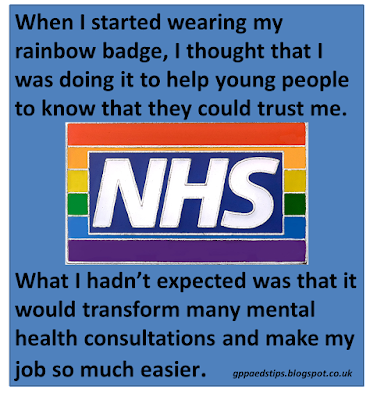 When a young person comes with a mental health problem we look at various factors that are involved.  One of the most important factors that affect mental health is sense of self.  Like all elements of mental health, sense of self is complicated.  It is important that young people feel safe and accepted in order to be resilient to the stresses of adolescence.  This is a time of life where identity is being formed, and to do that safely requires an environment which allows a young person to explore who they might be.

If a young person feels that any element of who they are or might be is unsafe in any way, this creates anxiety.

While sexual orientation is only one element of a young person’s sense of self, in a world where heterosexuality is considered normal, a young person may not feel that discussing any other sexuality is a safe thing to do.  They may be concerned that they will experience rejection by family, friends or anyone that they discuss their sexuality with.  In many cases, they have already risked discussing this issue and experienced a negative response.

As health care professionals, we should be routinely asking the right questions to identify any issue that may be a factor in a mental health presentation in adolescents.  We should ask about stressors in general but it is also routine to ask specifically about common anxieties.  The more likely it is that the thing may not be volunteered, the more important it is to ask.

There are many reasons why health care professionals might themselves feel anxious about asking a young person about sexuality.  Here are a few of the common ones:

We don’t have experience of discussing sexuality with young people.  If you don’t have a framework for doing this, you’re not alone.  Very few of us grew up in an environment where anything other than heterosexuality was considered normal.  Unless you have experience of a society where any sexuality is accepted without judgement, it is likely that you will feel a little bit weird about discussing these issues.  The irony is that we might feel anxious that we will somehow get it wrong.

The solution: just do it.  The best way to get past the weird is to be brave and trust that your attempt will be well received.  Step out in faith.

We are worried that the parent(s) may be angry that we have this discussion with their child.  Our anxiety is often seated in our knowledge that society is still heteronormalised and that some people are fearful or uncertain of any other sexuality.  There may also be a fear based in the misconception that by asking about sexuality, we somehow alter or influence it.  That is an interesting and unfounded belief.  There is no evidence that an open discussion can result in a change in sexuality.

The solution: Speak to the young person on their own.  This should be a normal part of a mental health assessment in a young person.  We wouldn't allow a parent to be a barrier to acting in their child's best interest in any other circumstance, so why let a social anxiety be harmful now?

We are worried about the response that we might get from the young person.   I’ll be honest here, this fear is reasonably rational.  If you ask a young person about their sexual orientation they may well give you a funny look and a muted response.  That’s fair.  When you are 15 years old, it is not something that comes up in conversation with an adult that you just met 10 minutes ago.

The solution:  Expect the question to make some young people feel awkward, but put them at ease by asking the question like it’s just another question.

There is another thing that can help with all of the above.  Last year I started wearing a rainbow badge.  The badge is small but always visible.  The idea is that it lets people know that I don’t judge people based on their sexuality.  To me, people are people.  While there are things that will change my opinion of someone, sexual orientation is not one of these.

When I started wearing the badge, I thought that my patients wouldn’t notice or wouldn’t know what the message behind the badge was.  I was wrong.

Immediately after I started wearing the badge, I noticed a change in the way that mental health consultations went.  When asking open questions about stressors, a significant number of young people started volunteering that their sexuality was a major factor in their presentation.  The stories varied from young people who were unsure about their sexuality but were afraid to discuss this with anyone to those who knew that they were not heterosexual but had experienced unpleasant responses to that when telling their family or friends.

I think that starting to wear a rainbow badge has been one of the most important innovations in my career.  I never expected such a small thing to make my life easier in such a big way.  I’m now somewhat concerned that the use of the rainbow as a symbol in the COVID-19 pandemic may have diluted the impact of my rainbow badge but I hope it hasn’t.

If you want to get information about sourcing rainbow badgesfor your organisation and the training that goes with the project, you can do that here. 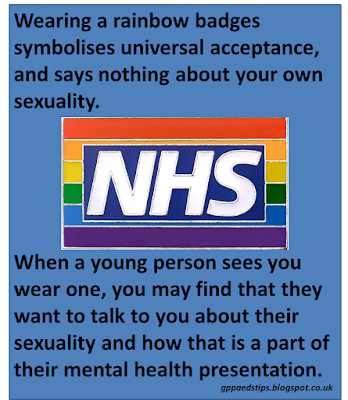 It may not have been designed as an part of a mental health toolkit, but for me, the rainbow badge has become an essential piece of equipment for my job.  2020 has been an odd year.  It turns out that I don’t need a tongue depressor, but I do need a rainbow badge.